A different perspective on this time of year

Posted on 20th December 2017 at 07:30
With the madness of the festive season reaching its peak, this year we thought we’d look at things from a slightly different perspective. And we do love giving people something to think about before we then skip merrily on our way(!).
So not the consumer fuelled frenzy that epitomises the modern approach. Enough said.
Nor the Victorian one seen on so many cards. The nativity scene. Or, perhaps, the snowy landscape, usually with a flock of sheep in the foreground. And not forgetting the perennial favourite, the festive robin.
But back to a more traditional way of living. One that, by necessity, was in tune with the natural world and the cycles of life.
There’s so much we take for granted these days. Just think about the basics we use every day without a second thought, but would have been ground breaking only a few generations ago. Electric lights, running water, mains drainage, central heating. Let alone shops stocked with every food imaginable all year round of the latest “must have” gizmo.
Seen from this perspective life is suddenly very different. Much less certain. Much less secure.
Let’s look at just one simple thing we take for granted, electric light. Without it the shortening days – and ever lengthening nights – of winter must have seemed never ending.
And, if you’d like a piece of trivia, it’s the reason why this time of year was known as the “night of two sleeps.” After all, with the shortest day in southern England being less than 8 hours long, it’s followed by a very long night. And who would sleep for up to 16 hours at a stretch? Very few people. So they’d wake up in the middle of the night for a quick “comfort break” and snack before dozing off for another few hours while they waited for the sun to rise and daylight to return. 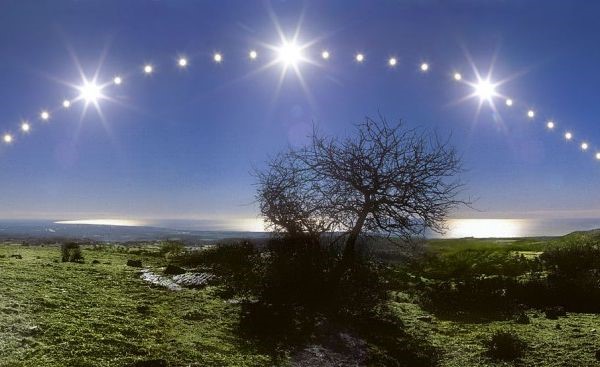 It’s little wonder that traditional societies still worship the sun. It literally is the bringer of life, after the long dark night before.
While, to the modern eye, there may not seem to be much to celebrate in December this wasn’t the case to our ancestors. There’s good reason why December is referred to as “mid winter.” It’s the time when the sun is at its lowest in the sky – in the northern hemisphere that is (!) – and the days are still getting shorter.
However, December also marks the turning point, when the sun reaches its lowest point in the sky and the days are shortest. The sun then seems to stand still for a couple of days before beginning to rise again in the sky. And, more importantly, the days start to get longer. True, it’s only by a few minutes each day, but by the middle of January the longer day is becoming noticeable.
With the shortest day – the Winter Solstice – being on the 23rd December, it’s easy to see why this day been celebrated for eons. It marked the return of life – the sun – to the world.
And, why the 25th is equally important. As the sun starts its upward journey in the sky towards Spring and Summer. Does this date ring any bells by any chance?!?
When seen from this perspective, it’s little wonder that the Equinoxes and Solstices were so important to our ancestors, marking the progression of the year. The Equinoxes marking the mid points of the year, in March and September, when the days and nights are of equal length. The Solstices marking the extremes; the longest day in June and longest night in December.
It also explains why the Winter Solstice – mid winter – was seen as the start of the year, as life – the sun – begins to return. And where many of our winter traditions have come from. The feasting. Celebrating the past year and the one to come. Spending time with family and friends. Decorating our homes with evergreens and berries.
And, if you need any more encouragement to consider a more traditional – less consumerist – approach to this time of year, we’ll quickly mention an article we recently came across. It listed the top five regrets that older people have:
Number one. Not spending time with family and friends.
Number two. Not having the courage to express their feelings.
Number three. Taking life too seriously and allowing worries to diminish their happiness.
Number four. Working too much, so missing out on their children and partner’s companionship.
Number five. Not having the courage to live a life true to themselves, rather than doing what was expected of them.
However you decide to celebrate this time of year, have a great holiday and very happy 2018.
As always, the choice is yours.
Tagged as: Lifestyle, Mindset, New perspectives
Share this post: