An easier way to start the new year

Posted on 3rd January 2018 at 07:30
First things first. Happy New Year. We wish everyone a very happy – and healthy (!) – new year. May all your dreams – or at least some of them (!) – come true during 2018…
As it’s the first blog of this shiny new year, it must be time for our annual post about new year’s resolutions (!). This year we’re not going to focus on the traditional approach to this annual ritual – and, sadly, why it simply doesn’t work – but on a completely different one. It still has the aim of improving your life which, after all is what it’s all about, but in a way you’ve probably never thought of before. 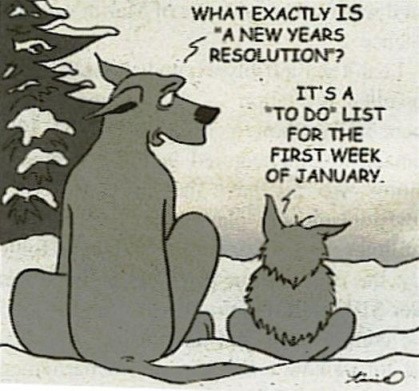 Instead of focussing on all the things that are wrong with your life / body / relationships / finances / work / fill in the blank it does the exact opposite. It focuses on the things you already do – or, perhaps, started doing ages ago but haven’t quite kept up with – and doing them better. Put another way, it’s about going deeper into what you already do; not wider into new things.
Rather than beating yourself up for the things you’ve got “wrong”, it acknowledges what you’re already doing “right” and then builds on that. Doesn’t this sound like an easier way to start the year and improve your life?
Let’s take a very popular new year’s resolution. To eat more healthily / lose weight.
The traditional approach would be to set yourself a long list of “do’s” and “dont’s” and then try to stick rigidly to it. Not forgetting to beat yourself up at regular intervals when it didn’t have the desired effect. And that’s assuming you managed to stay on it for more than a couple of days. Is it any wonder that few new year’s resolutions make it past the middle of January?
So how about an easier approach? Start where you are. The things that you’re already doing right.
Perhaps you’re great at eating lots of veg but not so good at eating fruit. How about taking an apple or banana with you to work? If you have it with you not only are you more likely to eat it (!) but less likely to succumb to the lure of the biscuit tin. You’ve improved your diet in two small ways without having to think about it, building on what you already do. Isn’t that much easier to do than telling yourself that you MUST eat more fruit and STOP eating biscuits?
Or you want to drink less tea / coffee and more water. It’s easy to carry a small bottle of water with you – or have a glass on your desk – as a reminder to drink more water. And, almost magically, as you drink a little more water you’ll find you want less tea / coffee. It really is that simple and much easier than telling yourself that you MUST drink two litres of water a day and STOP drinking tea / coffee.
And once you’ve made one small change, it’s easy to make another. And another. You’ll feel good about what you’re doing and it’s easy to see how far you’ve gone in a relatively short time.
The beauty of this approach is that you can apply it to anything you’re currently doing in your life. As well as anything you used to do in the past, but somehow stopped doing, always meaning to start it again.
Perhaps you started one hobby but were then distracted by something else. So why not pick up that long forgotten guitar again and get better at it, instead of being seduced by the latest must have instrument. Or the sport you used to enjoy but somehow stopped doing? Or may be it’s something completely different. It doesn’t matter what it was – or what other people think about it (!) – so long as you enjoy doing it.
Or what about finishing all those books / films / courses / CD’s / fill in the blank you bought but are now gathering dust on a shelf. Or never even started. You could even re visit some of your old favourites.
Instead of acquiring more stuff, you use what you already have. And, in the process, get much more value and enjoyment from them rather than being distracted by the latest must have; even if it’s a bargain in the sale (!).
At the same time you’re learning to live without the regular high we all get from splashing out on something new. Not to mention freeing up your hard earned cash to spend on something you really want AND will add value to our life.
Now we know this approach won’t be popular with big business, as there’s so much money to be made in selling people the latest new stuff. But wouldn’t you rather learn to do something you’re already doing – and enjoy – really well, instead of following the latest trend and doing the same as everyone else? Before flitting on to the next one. And the next.
As so often is the case, we make life much more complicated – not to mention uncomfortable – for ourselves than it really needs to be. So how about making 2018 easier for yourself and build on what you already have and do well?
As always, the choice is yours.
Tagged as: Health, Lifestyle, Mindset, New perspectives
Share this post: