Are vegetable oils as healthy as the hype?

Posted on 10th January 2018 at 07:30
With so many people making healthy eating one of their new year’s resolutions, it’s not surprising that we’re being asked about which vegetable oil is best to use at home. As this is a topic we looked at a couple of years ago, this week we’re going to cheat (!) and put this post up again.
Next week we’ll focus on one of the oils there are widespread concerns about – rapeseed oil – as there’s so much more to say about it. Like soy, it’s another example of how a half truth can be used to paint a rather misleading picture of the health benefits of a product. It’s also a timely reminder of the need to do a little research of your own rather than taking things on face value. And this applies wherever the information comes from, ourselves included (!).
So, without further ado, here we go. 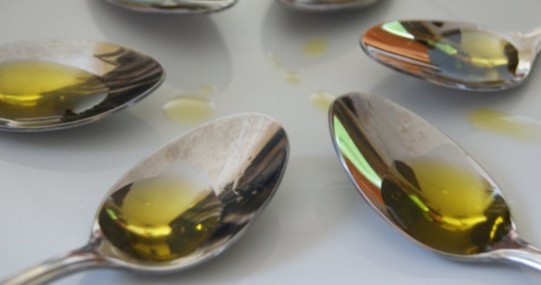 These days it seems that everywhere we go we’re spoilt for choice. Just look at your weekly food shop with new products appearing every week – many accompanied by glowing health testimonials. It’s no wonder there’s so much confusion about what foods are good for you. And which should be avoided like the plague (!).
One area which has changed out of all recognition are cooking oils. Turn the clock back a few years and the choices were simple. Blended vegetable oils or corn oil, with names such as Mezola or Canola. Or the more traditional dripping, lard or butter.
These days there are a huge choice of cooking oils on the shelf ranging from the well known Olive oil to Sunflower, Rapeseed and Coconut oils. Each comes with its own particular attributes and health claims, making it hard decide which one is best for you.
So let’s go back to basics and apply a little common sense to the matter. And, when you look at it, there are only two questions you really need to ask about any oil.
The first is whether it’s safe and nutritious when pressed into an oil. In other words, when used cold as a dressing on salads and other foods.
And the second is whether it remains safe and nutritious when exposed to high temperatures in the cooking process. While this may sound like the same question, they are both crucially important. Why is this?
Well simply because many otherwise healthy oils cannot tolerate high temperatures, becoming rancid and releasing damaging free radicals when heated. Examples of such oils include flaxseed oil and fish oils. While these oils can be safely used cold, say as a salad dressing, they should never be heated.
By contrast, other oils retain their health benefits when heated and are highly resistant to heating –with a high “smoke point” – making them excellent choices for cooking, as well as using cold. The top two of these oils are:
Olive oil, probably the best known of all vegetable oils. A staple of the Mediterranean diet for centuries, extra virgin olive oil is one of the world’s healthiest oils and has been linked to numerous health benefits. Not only is it high in monosaturated fats, vitamins and minerals; but also many other nutrients as well as antioxidants. Its health benefits include helping to reduce levels of cholesterol in the blood, guarding against heart disease, promoting healthy digestion, preventing gallstone formation and easing the symptoms of ulcers and gastritis.
A common misconception is that Olive oil becomes toxic when exposed to heat but this has been disproven by numerous studies. Not only does it remain stable when exposed to low to medium heat but is perfectly safe for cooking.
Coconut oil, seen by many as the new kid on the block, has been used in the tropics for centuries. Not only is it one of the stablest oils at high temperatures, it’s also a nutrient dense superfood. Coconut oil contains high levels of healthy saturated fats and antioxidants which promote brain health, boost immunity and strengthen thyroid function. Quickly absorbed, it provides rapid nourishment and also acts as a powerful energy booster. It’s rich in lauric acid which has antimicrobial, antifungal, antibacterial and antiviral properties.
As you would expect, like Olive oil, the healthiest type is raw, extra virgin Coconut oil – the kind that smells and tastes of coconuts. However refined Coconut oil, which has been deodorised to remove the smell and taste of coconuts, still retains its nutrients while remaining stable when heated.
Other oils which remain healthy and safe to use when heated include Palm oil, Sesame Seed oil and Avocado oil. Macadamia oil may also be used for cooking, but only up to medium temperatures.
Now you may be surprised that we haven’t mentioned two very popular vegetable oils so far. Sunflower oil and Rapeseed oil. And there are very good reasons for these omissions.
Taking Sunflower oil first, while it may be high in polyunsaturated fats, it doesn’t respond well to heating releasing free radicals and losing many of its nutrients in the process. It’s been linked to inflammatory reactions within the body, as well as cardiovascular problems when used long term. It may also affect white blood cells and insulin related functions in the body. While safe to use cold, Sunflower oil should never be used in cooking.
Rapeseed oil has a rather chequered history. On the plus side it can tolerate high cooking temperatures and has a mild taste. However it has a darker side, with high levels of the toxic erucic acid causing it to be banned by the FDA in 1956. Erucic acid irritates mucous membranes, damages the myelin sheath around nerves and interferes with the use of vitamin E by the body. It has also been linked to cancer, diabetes, obesity, high blood pressure and various types of cardiovascular diseases
As a result of the ban different varieties of rape were then developed with lower levels of erucic acid. Unfortunately, these are still considered high enough to cause the same health problems associated with the original product. Added to this there are concerns regarding the processing of the seed for oil and the heavy use of pesticides during the growth of the crop. For these reasons Rapeseed oil is best avoided, particularly as recent research has now linked lower levels of erucic acid to cardiovascular problems.
And, finally, there are a few of other things to remember when buying oils. Always buy oils in small batches, so they don’t stay on your shelf for months on end losing their nutritional value. Don’t forget to read the label, to make sure that you’re buying what you think you are (!). And, finally, always store oils in a cool dark cupboard.
As always, the choice is yours.
Tagged as: Diet, Health, Lifestyle
Share this post: