Asparagus, one of the joys of this time of year

Posted on 5th May 2021 at 07:34
We often talk about the joys of seasonal eating. Enjoying whatever foods are in season right now, however short their season may be. Not only does it mean we’re eating foods when they’re at their natural best – both in terms of flavour and nutrients – but it’s an easy way to eat local, avoiding the dreaded food miles.
We’ve all learnt about this the hard way. Succumbing to those perfect looking out of season fruit and vegetables found in the supermarkets during the Winter, flown in from the other side of the world for our delectation. And then bitterly disappointed to find they’re nothing like those grown locally and enjoyed at their natural time of year… Strawberries are a prime example of this which, sadly, most of us have fallen for at some time or other… 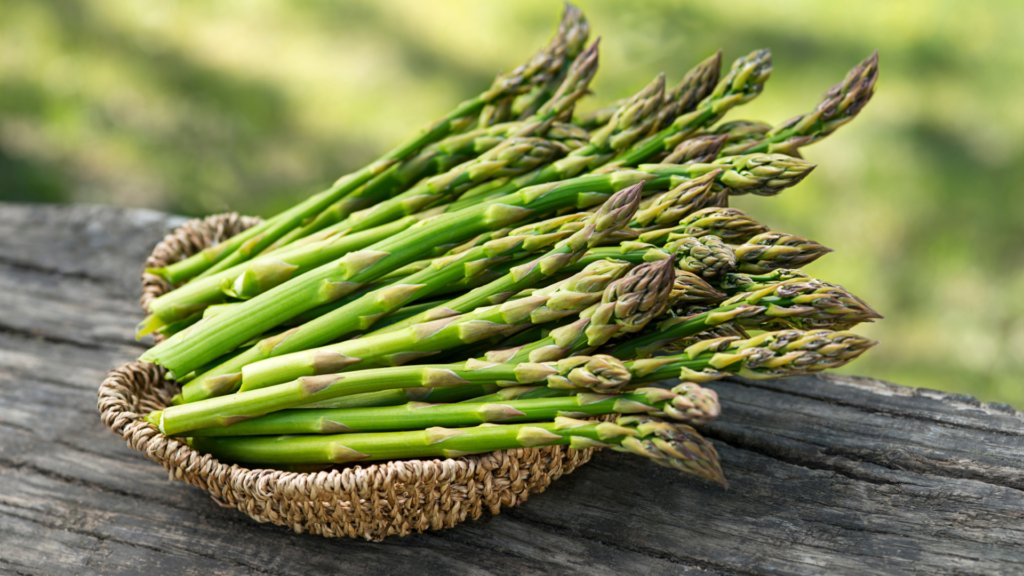 A couple of years ago we wrote about a spring green you may not have ever thought about before – and is thought of more as a weed by many people. Nettles. And there are many more we could talk about which also fall into that category, not least, Dandelions which are brightening up many roadside verges at the moment. However, before we digress too far, let’s look at a vegetable that’s well known and definitely at its best right now. Asparagus.
Asparagus is one of those vegetables that used to be found in every vegetable garden. It’s one of the few perennial vegetables – in other words it comes back every year from so called “Asparagus Crowns” – and, once established, requires very little looking after to produce its crop. It then produces lovely fluffy foliage which used to be a favourite of flower arrangers later in the year, so providing two crops in the space of one!
Like many vegetables, Asparagus provides a wide range of nutrients.
To start with, Vitamins A, C, E and K. In other words, it’s full of antioxidants, which help remove damaging free radicals from the body.
It’s also a rich source of Folates – the B Vitamins – which are used to produce the so called “happy hormones” of Dopamine and Serotonin. For this reason, it’s often referred to as a “feel good” vegetable to help boost the mood.
Added to this it contains many different minerals, particuarly Potassium and Zinc.
Asparagus also has good amounts of Quercetin, a flavonoid used to transport Zinc into the Cells, so helping to support our immune function.
It also contains two other nutrients worth mentioning. Glutathione, an anti carcinogen and Rutin, which helps protect small blood vessels from rupturing.
Finally, Asparagus is a rich source of fibre as well as a natural prebiotic, Inulin, which helps nourish the “good bacteria” found in the Gut. Not only does it help support digestion, but also plays a part in immune function, with the Digestive System generally being an unrecognised – but very important – first line of defence for the body as a whole.
As a slight aside, it’s been found that the Inulin contained in Asparagus can help in controlling blood sugar levels. This may be because, as already mentioned, it helps support the “good bacteria” in the Gut or through its antioxidant effect, due to the Vitamin A and C it contains.
Asparagus is a very easy vegetable to cook. The simplest way is to steam it – whether in a steamer or a pan with only a little water – until it’s al dente, rather than soft. It can then be eaten hot or cold, with either a little olive oil or the more traditional knob of butter.
Which just leaves the question that always comes up when Asparagus is mentioned. Why does it make some people’s urine smell, not to mention give it a slightly strange green tinge?
Well, it’s down to the high amounts of Asparagusic Acid it contains, which is rich in Sulphur, hence the smell. As Asparagus is digested, the Asparagusic Acid is broken down, releasing volatile components leading to the telltale colour and smell of urine. It’s amazing just how quickly this can happen, often within 15 minutes of the Asparagus being eaten. The good news is that it’s very short lived and not remotely harmful. And, interestingly, this only happens in about 25% of people, although quite why this is, no one quite knows.
So, why not enjoy this taste of this seasonal delight? The treat that signals Spring is here, with Summer just around the corner.
As always, the choice is yours.
Picture by unknown author
Tagged as: Diet, Health, Minerals, Vitamins
Share this post: