"Be yourself, everyone else is taken"

Posted on 14th March 2018 at 07:30
Even though these words of wisdom may date back over a hundred years, they’re as true today as when first spoken. They’re usually attributed to the great poet, playwright and raconteur, Oscar Wilde; although it’s been suggested he may have “borrowed” them from elsewhere. We’ll probably never know the truth and leave it to those of a literary persuasion to debate (!).
Anyway, before we digress too much further (!), let’s return to the present day and one of those things that seems so hard to do.
Be yourself. 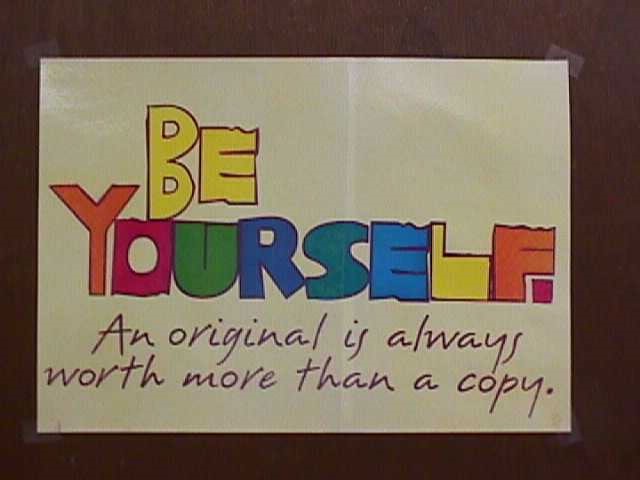 It sounds like such a simple thing and yet, from an early age, we’re under huge pressure to fit in with those around us. To start with the sphere of influence is very small. Centred on our family and their close friends. The place where we live.
However, as we start to grow up, this gradually expands. To close friends. Our school. Then on to college or work. And, in the process, a new pressure starts to be felt. Peer pressure.
At the same time, as we become much more aware of the world around us, we’re increasingly influenced by everything that appears in the modern media. Whether the more traditional television, papers or magazines. Or more recent additions. The internet in all its forms, particularly social media.
With this comes a new pressure – in some ways almost a cult – that of the celebrity. Those people held up in the media as role models – and we’re using that word in its broadest sense.
Perhaps it’s how they look or the clothes they wear. Their lifestyle. Or the causes they support or work they do. Sometimes, by a bizarre twist of fate, their infamy.
Regardless of who it is, the questions are the same. Who do you want to be like? Who do you love? What do you aspire to?
With many celebrities coming from the entertainment industry, it’s very easy for people to get dazzled by all the glitz. Not realising that their favourite celebrity is a well packaged product, selling whatever dream their sponsors require. Sadly, all too often, it’s the latest consumer “must have”.
Then, suddenly, the glitz starts to fade and a darker picture appears. And, ironically, in the same media that once spun the dream. Not only of unhappy people, broken marriages, drink and other problems. But of the gilded cage in which they live and the high price they paid to launch – and maintain – their careers. There’s been so much about it in the media over recent months we’re sure we don’t need to say anymore.
And then there are those who used their fame and celebrity to hurt and abuse others. Again, the picture painted in the media is a very different one to real life. And, sadly, there have been all too many examples of this in the last year or so.
It’s so easy to put a celebrity on a pedestal, particularly where we’ve only got the well crafted picture portrayed in the press to rely on. To be blinded by all the glitz and the glamour. Forgetting that it’s hard enough to truly know those we’ve known for a long time and are close to. How impossible it is for those we’ve never met. And feeling betrayed when the cracks start to appear.
If a person truly inspires you, great. Perhaps for their achievements or the way they’ve overcome adversity in its many forms. By all means learn from them and make use of their experience; but in a way that helps and empowers you. That takes you further along the path that you want to travel. Allows you to develop your own unique skills and talents.
But don’t let yourself become their slave, mindlessly following their lives and copying everything they do, in the hope some of the glitter will rub off on you. It never will.
The picture for this post says it in a nutshell: “An original is always worth more than a copy.”
As always, the choice is yours.
Tagged as: Lifestyle, Mindset
Share this post: