Posted on 19th January 2022 at 07:37
Taking a deep breath – or, as we tend to call it, a deep, calming breath – is something we all do quite naturally and spontaneously. When events threaten to overwhelm us, or in times of high emotion, positive or negative.
Sometimes it’s conscious and deliberate. It just seems like the “right” thing to do at the time and gives us a few seconds to get our emotions back under control. Other times it happens unconsciously, before we even realise we’ve done it.
Whatever the reason, taking a deep, calming breath is rather like pressing the “reset” button, bringing us back to the here and now. Helping stop us being swept away on a tide of emotions. Saying - or doing (!) – something we’d later regret. And, we’ve all experienced that…
So, why is taking a deep calming breath so powerful? 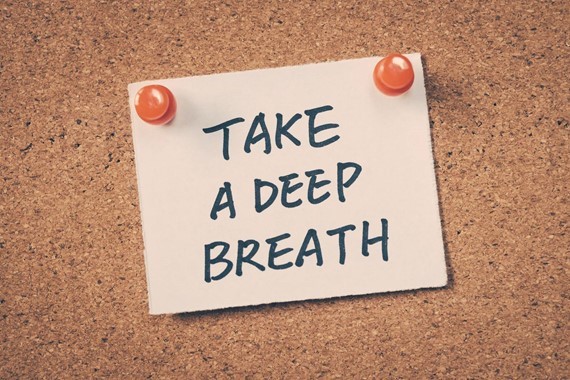 Well, to start with, it acts as a Pattern Interrupt. After all, breathing is something we don’t usually think about; so taking a deep breath requires our full attention. In doing so it anchors us in the here and now. Puts our attention firmly on one simple thing, breathing, rather than whatever was threatening to overwhelm us.
Just doing this simple thing puts a little distance between ourselves and whatever may be going on. And this, in turn, stops us being so subjectively tied up in it, giving us a more objective viewpoint. True, it may not be that objective, but it’s still a step in the right direction…
Equally important is that it helps forestall those knee jerk reactions. The ones we often regret further down the line. Whether now or in the dim distant future (!).
Having brought the Little Monster in our heads back under control (!), our physical body can then come down a notch or two. It takes us out of an adrenaline fuelled “fight or flight” mode, allowing normal functioning to resume. Our oxygen and carbon dioxide levels normalise, which all too easily get out of synch when we’re under any kind of stress, particularly as we tend to breathe more shallowly or quickly. Feeling light headed or a bit spacey is a sign that this is what’s happening.
As our Nervous System calms down, our heart rate and blood pressure drop back to normal. Phew! Normal service can then resume, which means all the non essential – as in non essential if there’s an emergency (!) – functions needed to keep us healthy. Two big ones are our Digestive and Immune Systems, both of which require a lot of energy to function normally and so are the first ones to be dialled down in an emergency. Ah, that feels better!
While simply stopping and taking a few deep – and slow – calming breaths will do the trick, there’s a very simple technique known as “Box Breathing” which takes it one step further. It’s a popular relaxation technique, with four very simple steps, hence the name. Just think of the four sides of a box and you’ll get the idea.
Ideally, find a quiet place where won’t be disturbed and sit down with both feet flat on the floor. In other words, don’t cross your legs if you’re sitting on a chair. If you’re sitting on the floor, it’s fine to sit cross legged. And if you can’t find a quiet place, that’s fine, just sit down and close your eyes to help shut out whatever may be going on around you (!). Finally, if you can’t close your eyes for whatever reason, just let you vision drift off into the distance and focus on something near the horizon – or on a cloud in the sky.
Here we go:
ONE. Slowly exhale through your nose for the count of three.
TWO. Hold your breath for a count of three.
THREE. Slowly inhale through your nose for the count of three.
FOUR. Hold your breath for a count of three.
Then keep going until you feel calmer and back in control.
For best results, keep going for at least two to three minutes, ideally for five minutes. This gives your body time to reset and, just as important, your blood pressure to come down (!). As you get used to doing it, you can increase the count for each section to four or five. The important thing is that each phase takes the same length of time, so you’re not counting more quickly for some phases than others.
This simple technique, when done daily – ideally first thing in the morning – can also help stabilise / reduce blood pressure and as well as with conditions such as Sleep Apnoea, Asthma and other breathing conditions. The key is to do it over the long term and giving it time to start seeing results. And, by this, we mean several weeks (!).
One step on from this is Alternate Nose breathing, a popular Yoga technique. As the name suggests, you breathe in and then out through alternate nostrils. It does require some concentration to do at first, so is a great way to shut down a busy head. It’s much easier to demonstrate than trying to explain in words so, if you want to find out more, click here for a short “how to” video. Even better, is for someone to teach you face to face, as it does take a little time to get the hang of it. We should say that the technique does vary a little from teacher to teacher so, if you already know how to do it, you may have been taught a slightly different technique and that’s fine.
As always, the choice is yours.
Picture by unknown author
Tagged as: Health, Lifestyle, Mindset, New perspectives
Share this post: