Do you ever think about your "internal flora and fauna"?

Posted on 6th June 2018 at 07:30
Having recently spent a chunk of time loading old blog posts on to the new website (!), we noticed how often the importance of our “internal flora and fauna” was mentioned. So we thought it was about time they featured in a post of their own and here we are.
It’s such an English way of describing something that most people would prefer not to discuss (!) but, before we go any further, let’s quickly explain what it means.
The human body – in common with that of other animals, including insects – also provides a home to a huge number of microorganisms. While this may not initially sound like a good thing, it has many benefits for both sides. 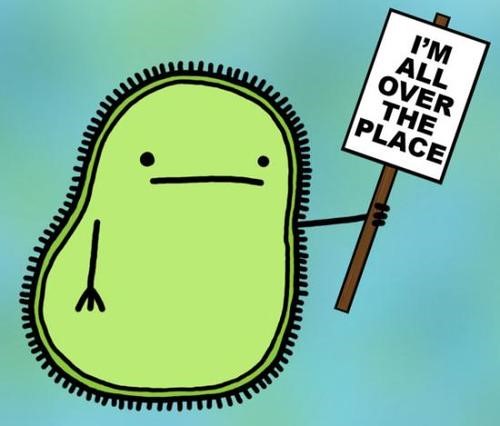 Nowhere is this more apparent than in the Digestive System. Here a complex community of fungi, bacteria, algae and other microorganisms can be found. The majority of these are beneficial and play an important part in maintaining their host’s health. More about this in a minute. They also keep other less beneficial and opportunistic microorganisms in check.
Together, they’re referred to as our “internal flora and fauna” or, if you’d like to get technical, the “gut microbiota” or “gut metagenome.”
It often comes as a surprise to people to hear about them, probably because their importance has only become apparent in recent years. Up until then, it was seen as one of those anomalies which didn’t have a simple explanation and so tended to be ignored.
Why is our “internal flora and fauna” so important?
To start with, they aid digestion by producing additional enzymes to help break down proteins, carbohydrates, fats and fibre. They also produce substances to help the resulting nutrients, vitamins and minerals pass through the gut wall and into the bloodstream.
Many of these bacteria also help to manufacture a number of vitamins including B1, B2, B3, B6, B12 and K2; as well as amino acids too.
They also help to detoxify the Digestive System of many chemicals including pesticides, heavy metals and preservatives.
Finally, they play an important role in maintaining a healthy Immune System. While it may not be immediately obvious, the Digestive System is also an important first line of defence for the body. This is because the foods we eat – and liquids we drink – are an easy way for microorganisms and other foreign bodies / substances to enter the body. The beneficial microorganisms not only physically protect the lining of the Digestive System, but their sheer numbers help prevent any invaders from spreading elsewhere in the body.
Where do they come from?
In the first instance, from our mothers. During childbirth, as we pass through the birth canal, our skin picks up bacteria from our mother. These pass into our – then – sterile gut where they form the basis of our internal “flora and fauna”.
They also come from breast milk. Interestingly, it’s been found that babies who are breast fed have a different “flora and fauna” to those who are bottle fed. As do those born by caesarean section, who tend to take much longer to establish their natural internal balance.
What affects them?
As you would expect, changes occur naturally in response to our age, diet and environment. This is one of the reasons why eating different foods in a different country can lead to stomach upsets. We simply don’t have the local – for want of a better word – internal “flora and fauna” needed to efficiently deal with them.
In addition, a growing number of medications have been found to affect the balance of beneficial and opportunistic microorganisms, leading to other problems. The best known of these are antibiotics, which clear many of the beneficial bacteria from the Digestive System, leading to an overgrowth of Candida. However, it's been recently found that many other medications have a similar effect including those for Depression, high blood pressure and heartburn as well as the contraceptive Pill.
What other health problems are being linked to these imbalances?
Obesity and weight control generally.
Heart Disease, including High Blood Pressure and Atherosclerosis
Depression and other low mood states such as SAD.
Cancer, particularly Colon and Lymphatic Cancer.
Autoimmune conditions such as Rheumatoid Arthritis.
More generally, studies have found that they affect energy levels, brain function, muscle strength and general immunity, as well as speeding up the ageing process.
How can we help improve them?
Not surprisingly, diet plays a huge part. Once again, the usual advice of eating a wholefood diet with plenty of fibre applies. Complex carbohydrates such as those found in oats, starchy root vegetables and wholegrain rice all help to increase diversity within the Digestive System.
Processed foods, with their high levels of sugar and low fibre, literally feed the opportunistic and should be avoided. The same comments able to alcohol, particularly spirits, too (!).
Live yoghurt and kefir, along with fermented foods such as sauerkraut, pickles and miso all contain beneficial bacteria which help to increase the levels of beneficial bacteria in the Digestive System.
Similarly, it’s been found that unripe bananas, mango and papaya can also help by remaining longer in the Digestive System where they slowly ferment and help to nourish the beneficial bacteria.
For some extra help, probiotics are really useful and can be safely taken over the long term. The key, as always, is to take a good quality formula which includes a variety of different beneficial bacteria. Sadly, live yoghurts – and the well published probiotic drinks such as Yakult – simply don’t contain high enough levels of beneficial bacteria to make much of a difference. And, in many cases are laden with sugar – or, even worse, artificial sweeteners – making matters worse rather than better.
One final thing to bear in mind is that the Digestive System is very sensitive to emotions, just think of butterflies in the stomach or those tummy wobbles. Yet another reason to regularly take time out to relax or mediate.
As always, the choice is yours.
Tagged as: Diet, Health, Lifestyle, New perspectives
Share this post: