Do you try to do it or just do it?

Posted on 15th June 2016 at 07:45
As regular readers of this blog will have realised by now we find people endlessly fascinating. Not only what they say – or don’t say (!). How they say it. Their body language. And lots more besides.
What particularly intrigues us is how little thought many people seem to give to what they’re saying. To the words they’re using and whether they really mean what they think – or assume (!) – they do. And, crucially, whether they realise how easy it is for one single word to undermine their best efforts.
Confused? 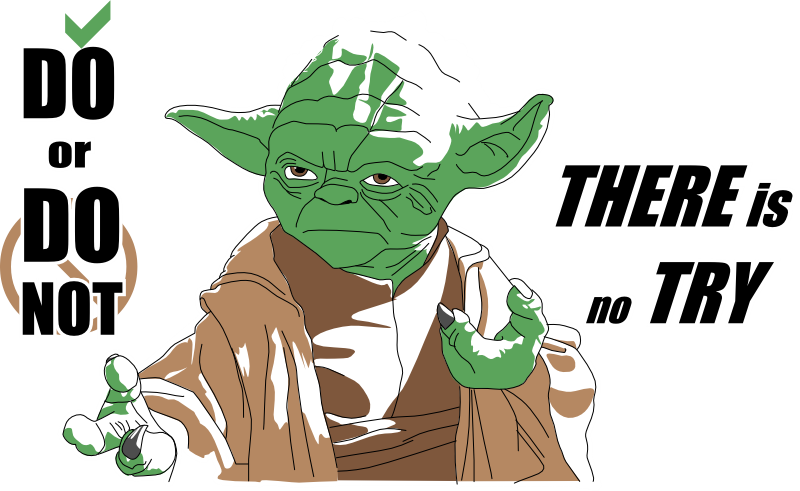 Well let’s take a look at one little word most people use every day. It’s only three letters long and sounds very powerful. Action packed, you may even say.
TRY.
We bet this wasn’t the word you were expecting to hear but, trust us, it’ll all make sense in a minute.
Before we explain why such a small word can so easily undermine all your best efforts, let’s see it in action:
I’ll TRY to get home early.
I’ll TRY to pick up that parcel for you at lunchtime.
I’ll TRY to drink more water (!). (If only we had a pound every time a client said that to us, we’d be very rich by now).
Now fill in one of your own:
I’ll TRY to ……………………………… (fill in the blanks).
Don’t just read these sentences. Say them out loud. Notice how the energy and intention behind them feels.
Did you notice how tentative TRYING feels?
That you’re not sure you can really do it. Or even want to in the first place (!).
How it feels much more like going through the motions, rather than a firm intention to actually go and do it.
Dig out any dictionary and you’ll quickly see this in black and white, with TRYING defined as:
“Attempting to accomplish or complete something.”
“Doing something to see if it works or will be successful.”
“Doing something in order to find out if you like it.”
Is it any surprise that TRYING to do something rarely translates into success? Or even starting to do it in the first place.
So here’s a radical idea. Why not just go and DO IT rather than TRYING?
That’s not to say you shouldn’t proceed with caution. Or take the time to plan what you’re going to do properly before you start.
It’s about setting out a clear intention of what you’re going TO DO before you put your energy into doing it.
And then going and DOING it.
TRYING is pointless. Not to mention a complete waste of your time and energy. Either DO IT or DON’T.
Just one quick word of warning. Even though you’ve put 100% effort into something, it doesn’t always mean that you’ll get exactly the result you wanted – or expected. But holding back will definitely ensure that you won’t get them either.
As we’ve said many times before, going out there and DOING things is the only way we learn. And, often the results can be much, much, better than we could ever have imagined.
TRYING to do something has failure automatically built into it. It’s for people who doubt their ability to do something. And when you start something with such a negative focus, is it any surprise that it doesn’t work out well?
And if you’d like a quick reminder here’s a great quote we came across recently:
“The difference between TRY and TRIUMPH is a little umph.”
Sadly the author’s name has been lost in the mists of time but it’s a great one to remember.
As always, the choice is yours.
Tagged as: Lifestyle, Mindset, New perspectives
Share this post: