Going further down the rabbit hole

Posted on 12th February 2020 at 07:45
A couple of weeks ago, we looked at our tendency to always look for external reasons for whatever’s happening in our lives. And how this quickly leads on to the perennially favourite “Blame Game”, as we find lots of reasons why whatever it is has nothing to do with us. Honest, guv.
Unfortunately, there’s a big flaw in this logic, which we seem to be completely oblivious to. A very large elephant in the room. If, as we’d like to believe, it was all down to external factors then, a little distance from whatever it is, would solve the problem. Unfortunately, as we all know far too well, this never quite works. Whatever it is just comes with us and continues to press our buttons.
So, continuing with simple logic, if the cause isn’t an external one then there’s only one other place to look. Inside, within ourselves. And this is where it starts to get very interesting, if not a little scary. If you missed this post you can find it here. 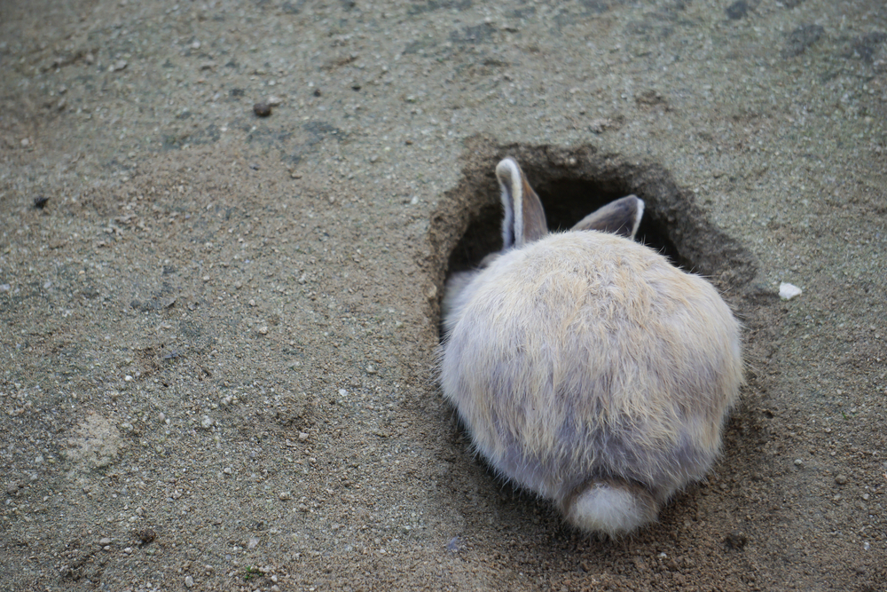 It’s often said that babies and young children are like little sponges. Soaking up everything going on around them in their own little world. And that’s a great analogy. In the early years, it’s all about taking in as much information as possible in the shortest amount of time.
Gaining an “understanding” of themselves, the world around them and their place in it. Learning the basic skills needed for life.
While it may only be at a very rudimentary level, the crucial foundations are being laid for later in life. And, unwittingly, seeds sown for problems far into the distant future...
Gradually, over time, their world expands. Not only does a much wider range of information start coming in but from many different sources. Playgroup, Nursery, School. As well as other people – and children – encountered in the wider world.
Some of the information coming in may be in line with their current understanding of themselves and their world. Some is not. Whether a little different – or very different.
And, somehow, all this information has to be reconciled in some way. Made to work for them. It’s hardly surprising that children can end up with a rather strange – even contradictory – understanding of life.
While the sponge analogy is a great one – highlighting how everything is soaked up without any question – there’s a big problem with this process. A lack of discernment.
In other words, none of the information coming in is ever questioned. Asking questions such as:
Whether it really is “true”?
Or, more importantly, “true” for them?
Is consistent with their current understanding?
If not, does their current understanding need to be updated – or, perhaps, completely replaced – in the light of this new information?
Babies and children simply don’t have this ability. Nor, sadly, do many adults…
On one hand, simply accepting all the information coming in as “true” without ever questioning it, allows a much greater volume of information to be taken in – and in a shorter time. However, as already mentioned, there’s a huge flaw in this process. It means that someone else’s understanding of that information is being accepted without question.
Once accepted, it then becomes part of the foundations on which their understanding of themselves and their world is built. This, in turn, is used to form their beliefs – their software or operating system, if you like – about themselves, the world around them and their place in it.
Put another way, it’s rather like someone getting a new computer and loading any old software on it, without ever stopping to ask whether it actually meets their needs. Works for them.
Perhaps, having multiple versions of the same software, leading to slower processing times and confused – or contradictory – results. Or having different programs which interfere with each other or run at different times – or in different scenarios. And that’s without any virus scanners, updates or completely new software being installed.
We wouldn’t do this to our computers and expect them to work efficiently. To do everything we wanted them to. But this is exactly what we’ve been doing to ourselves without ever realising it. And just because everyone around us is doing it, this doesn’t mean it’s a good thing for us to do too (!).
Unfortunately, with their parents and those around them having been through exactly the same process when they were children, it’s easy to see how the problem continues from generation to generation. As no one’s realised what’s happening – or that there may be a problem – nothing has ever been done to address it.
While it can sound as though this is deliberate or malicious, it’s not. It’s just “how things have always been and continue to be.” But that doesn’t mean they can’t change…
And, if you’d like a more poetic explanation of this process, there’s a lovely little poem by Philip Larkin which sums it up beautifully. As it includes one of those four letter words, we’ve included some strategically placed asterisks to prevent any offence:
This be the verse
They f**k you up, your mum and dad.
They may not mean to, but they do.
They fill you with the faults they had
And add some extra, just for you.
But they were f****d up in their turn
By fools in old-style hats and coats,
Who half the time were soppy-stern
And half at one another’s throats.
Man hands on misery to man.
It deepens like a coastal shelf.
Get out as early as you can,
And don’t have any kids yourself.
Once again, we know this different perspective on life can feel rather strange at first. And that the Little Monster in your head will probably have lots to say about it, particularly how it definitely doesn’t apply to you (!).
So, we’re going to leave it there for today to let it sink in a little. Then, in a couple of weeks, we’ll continue a little further down this rabbit hole. Help you really start to understand what’s going on in your head. And, just as important, highlight one cunning little trick the Little Monster in your head uses to stop you making any changes.
As always, the choice is yours.
Tagged as: Mindset, New perspectives
Share this post: