Hayfever - how to prevent another miserable Summer

Posted on 11th May 2016 at 07:45
To many people the appearance of bright yellow fields – fields of flowering rape – marks the start of Spring. To us – and its many sufferers – it marks something slightly different. The start of the Hayfever season (!).
Hayfever, variously known as a “Seasonal Allergy” or a “Summer Cold”, is only one trigger for what medics call “Allergic Rhinitis”. Other triggers include dust, moulds and animal hair.
Characterised by nasal congestion and a runny nose, sneezing, itchy eyes and nose; Hayfever may also cause shortness of breath and other asthma like symptoms. The conventional approach relies on antihistamines and steroids which are well known for causing drowsiness, together with a range of other unwanted side effects. 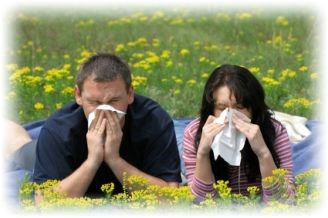 What causes Hayfever?
As the name suggests, Hayfever is caused by a sensitivity to pollens found in the air during the Spring and Summer. These irritate the mucus membranes lining the nose and respiratory tract, as well as around the eyes, causing the tell tale Hayfever symptoms.
The time symptoms appear can give a clue as to the likely culprit(s). Here in the UK late April / early May is usually the time that rape starts to flower. Followed by pollen from flowering trees and shrubs. June brings grass pollens and those from the various plants flowering along verges. While the end of the June is probably the time most people think of Hayfever occurring, as gardens come into full flower.
Interestingly, the end of September / October often brings further symptoms; although this time the culprit tends to be fungal spores, which are released as the weather becomes cooler and damper.
Why is Hayfever worse on some days than others?
As well as pollen levels, which vary from day to day – and during the day – there are a number of other factors which can make Hayfever worse.
Chemicals sprayed on crops by farmers at this time of year often intensify symptoms, as the already irritated mucous membranes react to another irritant.
Sunny days or those when pollution – or ozone – levels are higher tend to exacerbate symptoms.
As do calm, wind free days, which prevent pollen being dispersed further afield.
Rain can be both good news and bad, clearing the air of pollen by washing it out of the sky, while increasing levels nearer the ground.
What can I do to help?
There are no prizes for guessing that staying indoors during the warmest part of the day on sunny – or calm – days, when pollen levels are highest, will help.
An air purifier – or even a bowl of water on the side – will help clear the air of annoying particles, while keeping it moist and so less likely to further irritate the mucous membranes.
While it may sound old fashioned, slices of cucumber or cold chamomile teabags placed over the eyes are very soothing. An eye wash of warm water with sea salt dissolved into it, can also help.
Another old fashioned tip is steaming to help clear, open up and soothe the airways. Simply half fill a bowl with newly boiled water, place a towel over your head to keep in the steam and breathe it in for a few minutes at a time. Remember to keep warm immediately afterwards as your airways will be open. Lavender essential oil can be added to give it an extra boost. And make sure you have a hanky to hand!
A quick and easy way to help desensitise yourself to local pollens, is to take a teaspoon of local honey all year round. Many of our clients do this on an ongoing basis and it really does help reduce symptoms the next year.
Whether you know your specific triggers – or need a hair test to help identify them – it is then possible to desensitise yourself to your particular triggers. This can be done homeopathically, as well as helping to relieve any remaining symptoms. If you would like to find out hair testing or the homeopathic approach to Hayfever, please do let us know.
Here are a few ideas of other things you can do at home to help
Fresh ginger tea with local honey helps to break down congestion and so clear catarrh and mucus. It can also strengthen the Immune System and acts as a natural antihistamine.
Green tea blocks the production of histamine and is one of the best homemade remedies for building the Immune System.
Peppermint and Nettle tea can both help reduce congestion.
Our old friend, pineapple, contains bromelain to help clear mucus and high levels of Vitamin C to support the Immune System. Either top up the juice with warm water – about 50 / 50 – or eat the pineapple, not forgetting the core which contains the highest levels of bromelain.
Helpful Herbs
Euphrasia, also known as “Eyebright” is our number one off the shelf herb for Hayfever. Not only can it be taken in water to help reduce the symptoms of Hayfever, it’s also great for soothing sore eyes in an eye wash.
Luffa, by Vogel, is a combination of seven herbs which can also reduce the symptoms of Hayfever.
And, finally, some off the shelf supplements
Vitamin C, 1000mg a day, helps to support the Immune System and clear mucus.
Fatty Acids together with Vitamin D, can both help to lower the amounts of histamine produced by the body after exposure to an allergen, in this case, pollen. Although additional research is needed, it appears that a diet high in fatty acids may help decrease the incidence of Hayfever.
Quercetin is a bioflavonoid which has been shown to prevent immune cells from manufacturing and releasing histamine. It’s also naturally found in foods such as apples, garlic and onions.
Bromelain, from our old friend pineapple, helps to reduce and clear mucus. It also acts as an anti inflammatory, so helping to soothe irritated mucous membranes lining the respiratory tract.
As always, the choice is yours.
Tagged as: Diet, Health, Lifestyle, Vitamins
Share this post: