Posted on 9th October 2019 at 08:30
We love this expression and it perfectly sums up what we’d like to talk about today. If you haven’t come across this phrase before, it dates back to the Middle Ages and was used by map makers to indicate unchartered areas. As little was known about them they were assumed to be dangerous, harbouring all sorts of monsters and other unmentionable beasts. Hence the warning writ large on early maps. 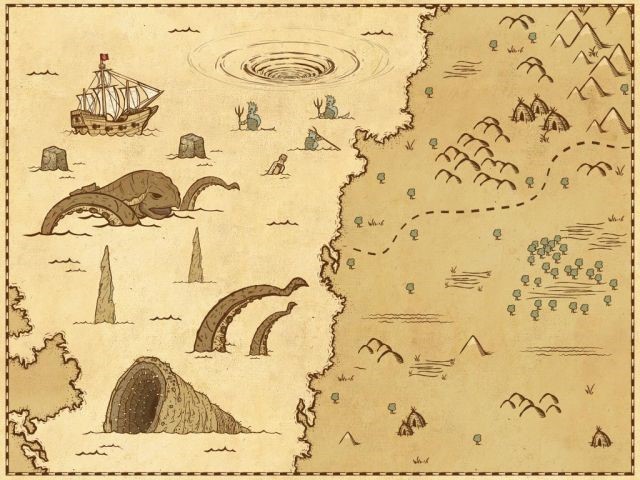 Looking back at this through modern eyes, it’s easy to laugh at such beliefs or superstitions. How on earth could anyone possibly believe such a ludicrous thing? However, before we mock too much, the unpalatable truth is that every person – and generation – has their own particular set of dragons. Unchartered territories they prefer to avoid. And we’re not just talking about physical areas either. What about all those new – or different – ideas, ways of doing things or pesky emotions we’ll do anything to avoid?
As always, it’s easier to see this in other people – or generations (!) – so here’s a quick example which is more common than you’d think. More surprisingly, it can be found in people of all ages, not just those of more mature years. It’s not using – or avoiding wherever possible (!) – anything computer related.
Perhaps the person concerned just made a decision to avoid using them. Or, maybe, they reluctantly learnt how to use an early – or very simple – version and have steadfastly refused to move with the times. And, as an aside, it’s amazing how many people are still using XP and wondering why it doesn’t seem to work in quite the same way as it used to…
Either way, increasingly, they find themselves marooned in no man’s land. Even worse, is the huge leap needed to catch up and move on to a more modern – and compatible – system. And we’re not just talking about the cost of replacing their computer / laptop and software. What about all the new knowledge and skills they’ll need, not to mention all the lost experience?
While this is a very simple example we can all smile at, as we’ve already mentioned, we all have our own unique set of dragons. Technological and otherwise. Things we’ve avoided thinking about or learning how to do for a huge variety of reasons. Or, perhaps, did so reluctantly but never spent any time really getting to grips with them.
Sadly, many of these date back to our childhoods. Perhaps a “bad” experiences of trying something new or being told by someone we trusted that we were no good at something or just plain stupid.
Matters are then made worse by our own Little Monster shouting very loudly when we consider doing something new. Coming up with endless reasons why we can’t – or shouldn’t – do it. The irony is that, being something new, how on earth could they know what it’s going to be like?
Often our own particular dragons make no sense to anyone else. Talking to people you don’t know, reversing the car into a parking space, using the self service till at the supermarket, going to the gym for the first time, allowing ourselves to shed a happy tear at the end of a “feel good” film.
However, there’s a simple antidote to anything new. Familiarity. Even a little is enough. Taking a deep breath, looking whatever it is in the eye and doing it for the first time. Finding out for ourselves that new doesn’t automatically mean difficult or dangerous. True it may not be the most polished performance but we actually did it. Hurrah!
And then we can decide what to do. Make a truly informed decision, rather than one driven by our natural fear of the unknown.
Do we want to make whatever it is a useful part of our lives? Perfect that particular skill.
Perhaps, there’s another – and better – way of doing whatever it is that would suit us better?
Or, for the moment, we’ll sit on the fence and continue in the same way, waiting to see what happens.
Whichever approach we adopt the most important thing is not to treat it as a final decision. Remaining open to other ways – whether technologically driven or not – of doing things. After all, life is a process of constant improvement.
While it may be a cliché, the only constant thing in life is change. To stand still, rather than going with the flow, requires a great deal of effort. Very quickly a gap opens up to become a huge chasm. The nervousness we feel at doing something new for the first time becomes an overwhelming – and paralysing – fear. Before we know it, we’ve been left far behind.
And, to help the process along, here are two very simple tricks to help cross the gap and tame our dragons.
The first is a quick way to silence the Little Monster when they start telling you all the reasons you can’t do something. Simply stop and ask yourself “What if it is possible?”. Not only does it feel better, but instantly opens you up to possibilities, rather than closing you down to it being impossible. Full stop. End of story.
Even better, it makes you smile. Yes, perhaps it is possible, even if you can’t see how at the moment. Each time the dragons start to appear keep asking yourself this question. You’ll be amazed how quickly it does become possible and in ways you could never have anticipated.
The second comes from a friend of ours, who made it a habit to do something small – and potentially scary – every day. And the emphasis here is on small. Something that took him slightly out of his comfort zone. Perhaps talking to a stranger in a queue, learning how to use a new piece of kit, making the phone call he’d been putting off. Whatever it was, he aimed to do it first thing each morning and for it to take less than 10 minutes. Not only did it make him feel good for the rest of the day – “I did it!” – but, after a while, he found he could easily take anything in his stride.
As always, the choice is yours.
Tagged as: Mindset, New perspectives
Share this post: