Lovely local veg at their best at this time of year

Posted on 21st October 2020 at 07:06
Having waxed lyrical about the joys of apples and pears a couple of weeks ago, this week we’re going to look at some of the veg which are at their best right now. And for the next few months too. True, they’re not as exotic as some of the other produce you can find at your local supermarket, but they provide just the right mix of nutrients needed during the colder months of the year.
So, without further ado, let’s start with one group of veg that doesn’t have the best PR. They’re seen as rather dull and boring, not helped by the traditional tendency of overcooking them. Well, let’s be honest, boiling them for hours until they resemble a grey green sludge in the bottom of the saucepan. In fact there used to be a standing joke that one of them should be put on to boil in November to be ready for a certain day in December…
Have you guessed what we’re talking about yet? 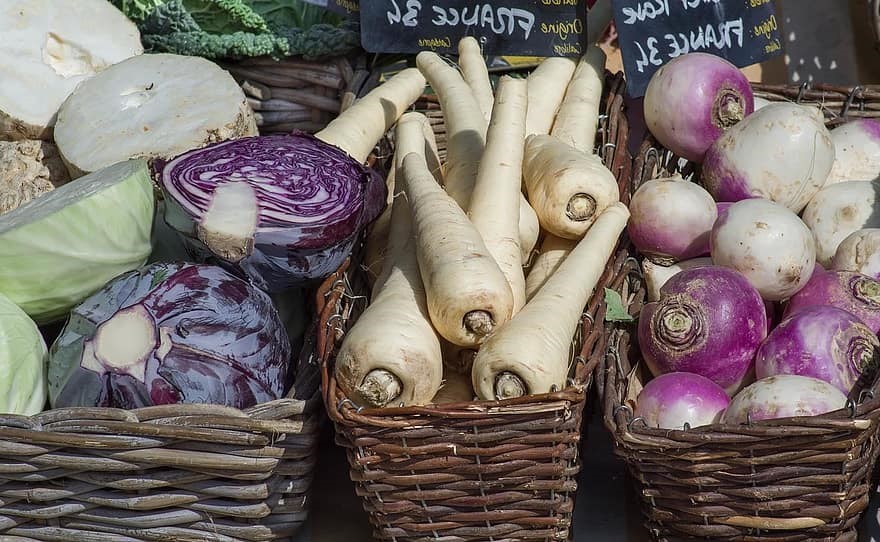 Brassicas. Or, if you prefer, Winter Greens. Cabbage, brussel sprouts – dreaded by many (!) – broccoli, cauliflower and kale. While they all contain slightly different nutrients – and in slightly different proportions – they all provide good levels of fibre, antioxidants, Vitamins A and C. Kale and brussel sprouts, for example, are particularly high in Vitamin K. Cabbage contains many B Vitamins.
Like most autumn and winter vegetables, the flavour and sweetness of brassicas improves after a frost. This is because the drop in temperature causes the plants to break down energy stores, turning them into sugar, leading to a sweeter and more intense flavour.
As we’ve already mentioned, many people are put off them at an early age because of over cooking. And that’s without the other tendency of over salting the cooking water – or, in the case of some older relatives who shall remain nameless (!) – adding salt several times during cooking as they’d forgotten they’d already done it!
Ideally, brassicas should still be green when they’ve been cooked with a slightly crisp texture and fresh taste. The simplest way to do this is by steaming, which is also much gentler, ensuring more nutrition survives the cooking process. There are now some very easy to use – and clean (!) – plug in electric steamers, which have the added advantage of a built in timer. However, using a steamer on the hob works just as well and frees up the space used by different pans for different vegetables.
In addition, cabbage and kale can be shredded and stir fried, which is another easy – and quick – way to cook them while maximising nutrition. And, finally, for the more adventurous kale can be added raw to smoothies giving them a wonderful deep green colour.
So, let’s move on to another group of winter veg which have a much better PR, Root Veg. Carrots, parsnip, turnips, beetroot. And, yes, we’re deliberately leaving out potatoes, as they’re already a staple of most peoples’ menus (!).
Again, root veg all contain high levels of fibre, antioxidants, Vitamins A, C and E. The fibre is particularly important as it’s broken down slowly over a period of time, not only giving a feeling of fullness, but also providing more sustained energy and so warmth for the body.
Turnips, particularly their green leaves, are high in Vitamin K. Carrots are a well known source of beta carotene which is converted into Vitamin A in the Liver. Parsnips provide high levels of potassium, which helps offset the sodium – salt – in salted foods traditionally eaten during the winter. This is less of an issue now that fewer foods are salted to preserve them but, ironically, can help to redress the balance in a diet high in salt and / or processed foods. Beetroot contains naturally occurring nitrates which help improve muscle contractions, particularly those in the Diaphragm. Not only does this make breathing easier but also helps clear the airways of mucus.
Like brassicas, root vegetables also benefit from a frost, becoming much sweeter with a richer flavour. Again, over cooking is a trap to avoid, although their more fibrous structure does make them more forgiving. They also roast very well which further intensifies their taste and sweetness.
And, if like Elaine, you were put off beetroot at an early age by it being pickled in vinegar it really is worth giving it another try. Not only does it make a great steamed or roasted veg, but a fantastic soup, both in terms of taste and rich dark colour. The only thing to remember is that beetroot really stains – and takes some getting out too – so be careful not to spill or drop it!
We know we’re always extolling the virtues of eating foods in season but it does make all the difference on so many different levels. Not only does it make it easier to shop locally, so supporting local businesses and saving food miles, but it helps ensure your body gets exactly the nutrients it needs for the time of year. Fresh produce that’s genuinely fresh and hasn’t been stored for weeks – or even months in some cases.
Eating seasonally also helps support digestion. Foods that are at their best right now contain more fibre / starch, making them easier to digest, while providing lots of energy to help keep us warm. It also makes choosing what to eat so much simpler, saving time in our all too busy lives.
Finally, there’s nothing quite like anticipation and joy of eating food that’s at its best at that particular time of year. And, there’s nothing quite like the disappointment of eating a food that looks wonderful, but tastes of very little, out of season. Just think about the difference of strawberries found in the shops in winter and those fresh from the garden – or local farm shop – in the height of summer.
As always, the choice is yours.
Picture by unknown author
Tagged as: Diet, Health, Minerals, Vitamins
Share this post: