One of the delights of this time of year, tasty tomatoes

Posted on 10th July 2019 at 09:00
We often talk about the benefits – and delights (!) – of eating fresh fruits and vegetables when they’re at their very best. In other words, in season – eaten at the time of year nature intended – AND locally produced, so they reach our plates fresh from the field – or garden (!).
It’s no accident that the starchy, more satisfying, root vegetables are at their best in the cooler months of the year. Nor that salads and berries come into their own right now. Each provides exactly the right nutrients needed by our bodies at the time of year they’re naturally ready to eat.
For example, root vegetables are rich in carbohydrates to help maintain energy levels – and keep us warm – during the winter months. They also provide good levels of Vitamins A, C and E, to support the Immune Systems and so avoid the winter bugs.
By contrast, salads and berries have a much higher water content, helping replace the water lost as sweat during the warmer summer months. Added to this they also contain high levels of magnesium and potassium to help replace that lost in sweat – and so prevent the dreaded night cramps…
So, this week, let’s celebrate a vegetable – that’s strictly a fruit – which is coming into its best right now. Even better, it produces a prolific crop right through till the Autumn. If you don’t grow them yourself, you’re guaranteed to have local gardening friends giving them away. Or, at worst, people selling them at their garden gates for a fraction of that charged by your local supermarket. 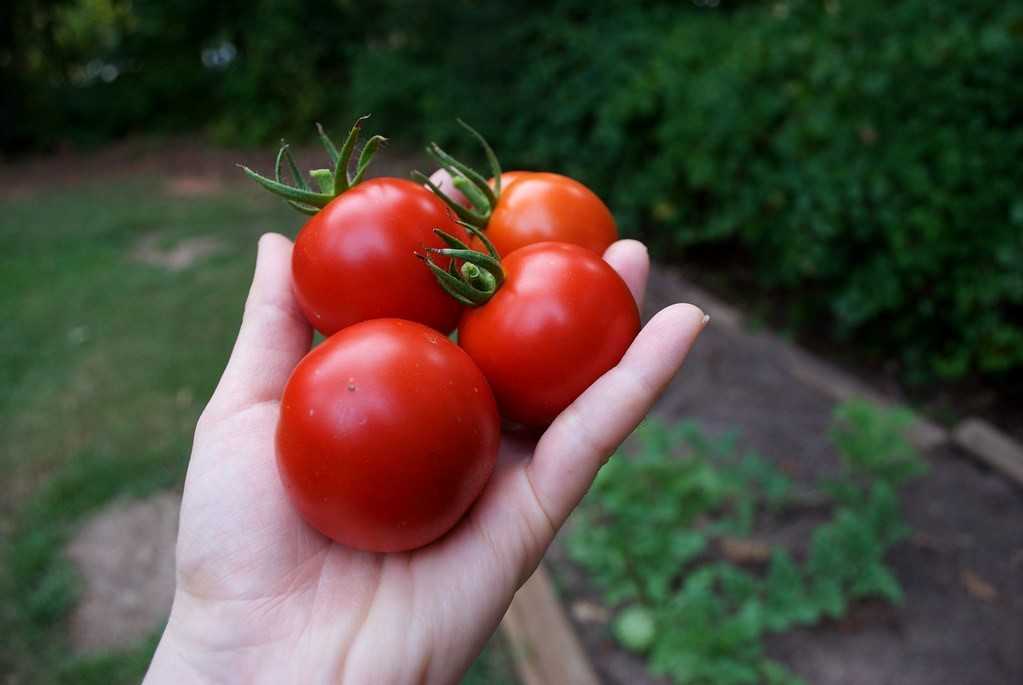 There’s no doubt that fresh tomatoes are one of the delights of the summer. While we tend to think of them first in salads, they’re equally good cooked and incredibly versatile. In addition – and very unusually – cooking enhances their nutritional value in one very important respect. More about this in a minute.
We’re already mentioned two strange facts about tomatoes. That, strictly, they’re a fruit not a vegetable. And the positive effect cooking has on them.
Well, here’s another one. They come from South America and are a member of the nightshade family along with aubergines, courgettes, peppers, chillies and potatoes. Which leads us on to our last strange fact about tomatoes for today.
Like other members of this family, green tomatoes contain high levels of a natural insecticide, solanine. It prevents them being eaten before they’re ripe and is naturally broken down as this occurs. It means that eating any of them before they’re ripe – or in the case of potatoes if they’ve been exposed to the light – can cause headaches, nausea and stomach aches. You have been warned!
Like many other summer crops, tomatoes are high in water. As well as fibre, they also contain a long list of vitamins and minerals including Vitamins A, C, E and K as well as potassium, sodium and iron.
However, this isn’t all. Tomatoes also contain many other phytonutrients which include:
Beta carotene, like Vitamin C, is an antioxidant and gives tomatoes their bright red, orange or yellow colour. It’s used by the body to help manufacture Vitamin A.
Naringenin is a flavonoid and antioxidant found in the tomato skin which has been found to reduce inflammation.
Chlorogenic Acid, another antioxidant, that also helps reduce inflammation as well as lower blood pressure.
And, finally, one you may well have heard about. Lycopene. Not only is it a powerful antioxidant but gives tomatoes their deep rich colour. It’s found in the highest concentrations in the skin and, the redder the tomato, the more Lycopene it contains.
As already mentioned – and very unusually – cooking increases the amount of Lycopene that can be absorbed from cooked tomatoes. This is because cooking slightly changes the structure of the Lycopene, making it easier for the body to absorb. Or, if you want to be more technical (!), cooking increases its bioavailability.
This is in stark contrast to the vast majority of nutrients found in fruits and vegetables, which are less stable and so very easily destroyed by the cooking process. As an aside, it’s also the reason why it’s so important to make raw fruit, vegetables and salad a mainstay of the diet all year round to ensure a full range of phytonutrients are consumed each day.
Tomato products including tomato paste, sauces, juice and ketchup are the richest sources of Lycopene. In fact, these cooked products usually have much higher amounts of Lycopene than raw tomatoes. Having said that, don’t forget that tomato ketchup also contains high levels of sugar, so this isn’t a good excuse for eating more of it!
It also needs to be borne in mind that Lycopene is a fat soluble nutrient. In other words, for maximum absorption is needs to be eaten with a plant based oil, such as olive oil. Just think of the Mediterranean diet and how olive oil is used in both raw and cooked tomato dishes.
Lycopene has been the subject of much research in recent years, particularly its antioxidant effects. It’s been found to slow down the natural ageing process (!) as well as reducing high blood pressure and cholesterol, which are well known risk factors for Heart Attacks and Strokes. Higher levels of Lycopene in the blood are also thought to reduce the risk of certain types of Cancers, particularly those of the Prostate, Colon, Lung and Breast.
And, before we go, a couple of other things to remember.
Cooked tomatoes are naturally more acidic than raw ones. For this reason, using canned tomatoes regularly is not advised, as the acid from the tomatoes can leach BPA from the tin’s liner into the food. Instead, either cook using fresh raw tomatoes or buy those in jars – or similar container. Even better, make your own tomato sauce during the summer when there’s a glut and freeze it to use during the winter.
Their acidic nature also means that eating them regularly – or in large amounts – is not advised if you have digestive issues or Arthritis as it can make symptoms worse.
Finally, if you need yet another good reason to eat foods in season, have you ever thought about how commercially grown tomatoes are harvested and stored? And we’re going to leave aside how they’re grown in the first place...
To ensure they store well, tomatoes are harvested while still green, long before they’re naturally ready. They’re stored in refrigeration units until required before being sprayed with ethylene gas to ripen them. And off they then go to the shops.
It’s little wonder that they taste – and look – completely different to home produced tomatoes. And, if you’ve been buying tomatoes on the stalk, as they smell much more like tomatoes, we’re sorry to tell you that the smell comes from the stalk not the tomatoes… A very clever marketing trick that’s all too easy to fall for, not to mention costing you more in the process...
As always, the choice is yours.
Tagged as: Diet, Health, Minerals, New perspectives, Vitamins
Share this post: