Ouch, is it a Sprain or a Strain?

Posted on 27th February 2019 at 08:30
Over the years, we’ve seen many different clients with many different injuries – and, as you can imagine, heard some very interesting stories as to how whatever it was happened. There’s often the temptation to ask whether, whatever they were doing at the time really was a good idea (!), but it’s one we try not to succumb to. And before we digress any further – or break any confidences – we’d better stop there…
However good the story, the symptoms of Sprains and Strains are very similar. Muscle tenderness, swelling, pain and restricted movement. So, it’s not surprising that they’re easily confused even though there are differences, if you know what to look for. However, the good news is that they can both be easily treated at home with the RICE protocol and a little common sense, more about this in a moment. 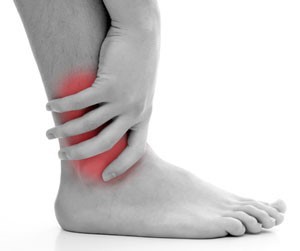 Before we talk about them – and how they differ – a quick reminder about our “internal knitting” as one of our tutors used to describe it (!). In very simple terms, bones provide the structure of the body. They are held together by muscles, tendons and ligaments which are all able to contact and then relax to allow movement to occur.
Ligaments connect two bones together in a joint, such as in the Knee, Ankle or Wrist. While they allow the joint some movement, their main job is to keep it stable and strong.
Tendons do a slightly different job, attaching muscles to bones. As the force felt in a muscle is greatest where it attaches to the bone, tendons are much stronger and more fibrous than the rest of the muscle. Again, they allow some movement while preventing the bone from moving too far in one direction.
What’s the difference between Sprains and Strains?
A Sprain is due to the over stretching – or tearing – of a ligament. It’s usually caused by an accident or acute injury, with the most common one being to an Ankle.
A Strain is also caused by over stretching – or tearing – but of a muscle or tendon. It may also be caused by an accident or acute injury as well as an ongoing repetitive injury, such as to the lower Back or Wrist.
And the symptoms…
As already mentioned the symptoms are very similar with both having muscle tenderness, swelling, pain and restricted movement.
There may also be bruising and muscle weakness. However, the severity of the symptoms and how it happened are usually the giveaway.
Sprains tend to have more acute symptoms, particularly not being able to put weight on that particular joint. Often, there was a popping or tearing sensation when the injury happened.
Mild Sprains and Strains can be easily treated at home, however there are warning signs to be aware of which include:
• Not being able to walk more than a few steps without significant pain.
• Not being able to move the affected joint.
• The injured area being crooked or having lumps that other joints don’t have. In other words there may be a fracture or dislocation.
• There’s numbness, coldness, redness or red streaks around the injured area.
• The same joint has been injured previously.
Things you can do at home to help
Sprains and Strains can both be treated with the RICE protocol which stands for rest, ice, compression and elevation.
R, for rest, doesn’t mean being completely inactive (!) but only moving that area gently so as not to cause any further injury. This also helps encourage blood flow into the area while keeping it mobilised and allowing any swelling to reduce.
I, for ice, will help to reduce swelling, pain and any muscle spasms particularly in the first couple of days. Packets of frozen peas are ideal for this, as they mould to the area and can be put back into the freezer between uses. They should always be wrapped in a towel to prevent any skin damage from the cold.
C, for compression, in other words a supportive elastic bandage. This helps to immobilise the area, so preventing any further damage, as well as reducing the swelling. But don’t have it too tight, it’s to support not to push the swelling elsewhere or cause numbness.
E, for elevation, again helps to reduce swelling.
We know we always say it but dehydration will only make things worse. Make sure you drink plenty of water as these speed recovery times.
Off the shelf products that can also help include astaxanthin, ginger, bromelain, curcumin and arnica. Acupuncture can also be useful to help reduce swelling and pain as well as shortening recovery times.
It always takes longer for people to get over Sprains and Strains than they expect. Minor cases usually need at least a fortnight, more serious ones can take several months. It’s important to be patient and resist the temptation to do too much, too soon.
The conventional approach
As well as using the RICE protocol, pain relief and anti inflammatories may also be used in more severe cases. Physiotherapy may also be needed once the injury has healed.
How to avoid Sprains and Strains in the first place…
As always, a little common sense can go a long way. Whatever the activity or sport, make sure that you’re using the proper equipment, particularly shoes and any necessary protective equipment. Yes, we know it’s boring, but it’s amazing how many injuries are caused by simply not being properly kitted out.
Similarly, be aware of the weather conditions. If it’s cold, wet, slippery or icy you may want to have a rethink about what you’re doing – and how you’re doing it. Injuries are more likely if it’s cold, wet or icy.
Make sure you warm up properly beforehand AND cool down afterwards. And this comment applies to all activities, not just sport!
Do different forms of exercise to improve your overall fitness and also prevent injuries from over exertion of one particular form of exercise.
Try to do some form of exercise every day and avoid the Weekend Warrior syndrome (!). You’d be amazed how often we have calls from clients on a Monday morning who have done no exercise during the week and then over compensated at the weekend, with all too predictable results…
Listen to your body. If you’re very tired or it hurts, take a rest or have a day off. Pain is always a warning to stop doing something before it’s too late.
If you have a problem area, a few minutes every day doing tailored exercises to strengthen it will make a huge difference in the long term.
And, finally, don’t forget our old friend Arnica. It be used as a general support taken both before and after exercise as well as if the worst happens, to speed recovery.
As always, the choice is yours.
Tagged as: Health, Lifestyle
Share this post: