Rubbish in, rubbish out doesn't only apply to computers...

Posted on 13th January 2021 at 07:08
Diet is one of those topics we come back to again and again, both here on the Blog and with Clients. What never ceases to amaze us is how little thought – or planning – seems to go into what many people are eating each day. Whether on their plates or, increasingly, on the go. And, while most people are ready to accept the maxim of “rubbish in, rubbish out” as far as their computer is concerned; for some reason this logic often doesn’t seem to stretch as far as their bodies.
Why is this?
Well, we’d love to say there was one very simple answer but, unfortunately, this isn’t the case. From our perspective there are many different factors at play accompanied by a large dose of irony. And, if that sounds a little strange, let us explain. 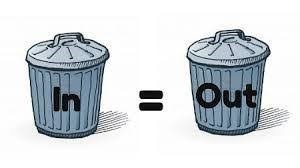