Posted on 1st June 2016 at 07:45
This is a sentiment we regularly hear from clients and you probably hear it – or think it – too from time to time. Whether about yourself or someone else.
Whatever the grief or loss, there seems to be an assumption that they should get over it in a short period of time. A few weeks or months. And then get on with life without making any fuss.
Some say this is a British affliction – stiff upper lip and all that – but it seems to run through many other countries and cultures.
The real question is whether this approach helps the person concerned? 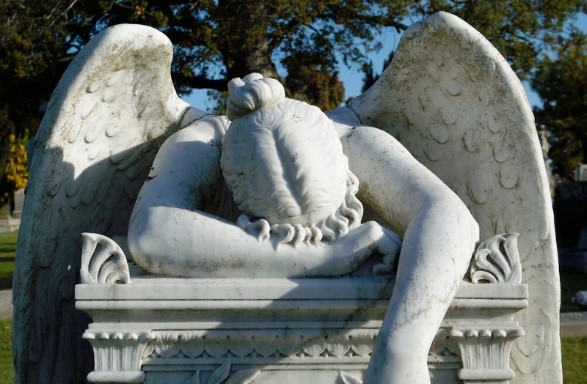 In some ways, yes, encouraging them to pick up the threads of their life.
In other ways, no, by not giving them the time they need to grieve.
As always the problem is that grief is different for every person. Not only the event triggering the grief, but how they cope with it.
Grief comes in many different shapes and sizes, many of which aren’t immediately obvious to another. What may seem overwhelming to one person, may not be so to another. Another’s black cloud may be someone else’s silver lining.
The most common assumption is that every person will do grief in the same way. They don’t. And this simple misunderstanding can make life even harder for them, when they’re having to cope with everyone else’s preconceptions too.
This important lesson was brought home to us a few years ago by a client who had just lost her husband. As you would expect we offered the usual words of comfort and commiseration, to be greeted with a huge smile and comment that it was the best thing that could have happened. And not because his death had been a release from illness. Instead it had been a release from a very unhappy marriage, from which she had felt unable to escape. Cue some quick thinking to make the appropriate remarks (!).
Instead of falling into this trap, ask them how they’re coping. What you can do to help. And, most importantly, leave your offer of help open. They may not be able to think of anything today, but they may need something tomorrow or next week.
A common myth we regularly hear is that everyone will go through the five stages of grief. Denial. Anger. Bargaining. Depression. Acceptance. This gives the impression that people work their way through them in a linear fashion, but this often isn’t the case. Some people do these emotions in a different order. Or a completely different set of emotions. Some get stuck in one, taking months or years to move on.
Then there’s the rule of thumb that says people should allow one month for every year that the person – or thing – was in their life to grieve for it. Again this just isn’t the same for everyone.
If there’s one message we want to get over in this blog post it’s that there’s no right – or wrong – way to do grief.
Everyone does it in their own particular way and time. And it does take time. Don’t assume they’ll be over it a few weeks later. If anything this is the time people really need support, as everyone forgets that they are still in the process of rebuilding their lives.
Oh and one other thing we regularly come across. This is where someone seems to deal really well with the grief at the time but, in reality, have just bottled it up for whatever reason. So while they may seem fine, sooner or later the grief has to be dealt with. And it may be years or decades later. In the meantime, the grief is carried around with them like a crushing load. The warning signs will often be there if only the time is taken to see them…
And finally don’t forget that seemingly trivial events – often years later – can bring all the emotions flooding back. A song on the radio. Misaddressed letter. Inadvertent remark by someone.
If it’s you who’s just had their world turned upside down, please don’t be afraid to ask those around you for help. It’s just that they’re busy being British and don’t know what to do to help.
As always, the choice is yours.
Tagged as: Lifestyle, Mindset, New perspectives
Share this post: