The art of forgiveness

Posted on 6th December 2017 at 07:30
A couple of weeks ago we talked about the mysteries of time and sowed a radical little seed. Forgiveness. Having left it there to grow for a while, we’re now returning to talk about it a little more. Give a different perspective.
Before we go any further, we must also say that we’re not talking about forgiveness in the religious sense you were probably taught at school. The stories about forgiving your enemy. Turning the other cheek. Etc. Etc. 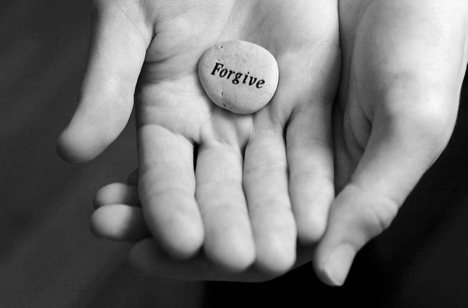 And, at this point, we’d usually dig out the dictionary to help us. See if the particular word we’re focussing on really means what we think it does. However, on this occasion, the dictionary really isn’t very helpful at all:
“Forgiveness, the act of forgiving; the giving of a pardon; the giving up of a resentment or claim.”
So let’s look at forgiveness from a different perspective.
It’s an easy trap to fall into, but we don’t all think the same way. Were brought up the same way. Relate to those around us in the same way. Have the same set of rules to live life by. In other words, we each live our lives – and experience them – differently.
As a friend of Elaine’s so eloquently put it years ago, “you may be playing cricket, but everyone else is playing baseball. The rules are completely different.”
Added to this much of our lives is lived on autopilot, so we’re not even aware of many of the things we do each day. We just do them without thinking. “That’s the way things are done.” “That’s the way things are.”
This particularly applies to beliefs, habits and routines dating back to childhood, which are taken as being “the norm” and still control the way we live as adults. The crucial thing to remember is that in accepting them we’ve never stopped to question whether they really are true or work for us.
Sadly, here in the West, any sort of introspection – or personal development – is seen as a rather strange fringe activity. In fact, reading this makes you something of an oddball (!). Anyway, before we digress any further, the point we’re trying to make is that the majority of people have never ever questioned what goes on in their heads. Let alone why they behave like they do.
So what has this to do with forgiveness? Well, more than you would think.
As you can now see, there are so many different variables at work – some obvious, some not – that we can NEVER know exactly why someone behaved as they did. Or were even aware of what they were doing. Or the effect it would have on the other person. And, if you asked them to explain why they did what they did, they probably couldn’t.
Even more sadly, all too often, those affected in one generation become the perpetrators in the next generation. The hurt – or abused – child becomes the cruel – or abusing – adult. The “norm” they were exposed to in their childhood is inflicted on their children. Without any introspection – or personal development – how could it be any different?
This isn’t to excuse what may have happened but to understand how it could have.
By looking at whatever happened from both sides, it quickly becomes clear that there’s damage on both sides. And it will continue until the chain is broken. True forgiveness allows the hurt to be left in the past where it belongs and for all those affected to get on with their lives.
If this sounds like too tall an order, there’s an ancient blessing that helps break the chain and release the hurt:
“I love you, I forgive you, I’m sorry, thank you.”
You don’t have to say it out loud. Or to those concerned. Just say it to yourself every time those memories come up or the person concerned pops into your head.
It’s incredibly powerful and helps clear all the hurt – and other rubbish – you’ve been carrying around with you.
Here’s one final thought on this before we go.
All too often we hear clients saying that they can’t forgive the person(s) involved until they apologise. Sadly, if this is the case, you’re going to have a very long wait. (And, in the unlikely event they did, it probably wouldn’t be enough anyway.)
All you’re doing is perpetuating the hurt – and their control over you and your life. Continuing to let the past rule your present.
Or, put another way:
“It’s like drinking poison and expecting the other person to die.”
As always, the choice is yours.
Tagged as: Lifestyle, Mindset, New perspectives
Share this post: