The promise of the Pill, has freedom come at a price?

Posted on 23rd May 2018 at 07:30
We recently came across a fascinating article from The Economist magazine – it was published in December 1999, so we’re a little behind the times (!) – discussing the one invention that defined the 20th century. The link is below if you’re intrigued and the good news is it’s a short article (!).
https://www.economist.com/node/347484
Much to our surprise it wasn’t one of the usual great discoveries. Radar, powered flight, plastic, nuclear materials, radio or television. Nor the often cited antibiotics. However, that’s heading in the right direction. Instead it was the female contraceptive pill – or as it’s more usually known, the Pill. 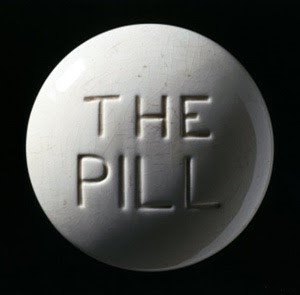 The article went on to say that there was one simple reason it was so important. It was the first time a drug had been designed to mimic a substance made naturally by the body. And one whose effects were already well known and understood. However, it wasn’t as straightforward as it first appeared. Not only did a progesterone like molecule have to be produced, but one that was similar enough to its natural counterpart to fool the Reproductive System, while not being destroyed by the Liver.
With it came huge changes for women, starting with the choice of whether – and when – to have children. Its effects can still be felt today, with the Pill playing an important part in our ever changing society.
These days the Pill comes in two main forms, as well as many different strengths. The Mini Pill, which only contains progesterone – in the form of synthetic progestin – is less popular these days. And the Combined Pill containing both progesterone and oestrogen – with the oestrogen in the form of synthetic estradiol. As a rule of thumb, the Combined Pill tends to be prescribed unless the client is breast feeding, is sensitive to oestrogen or has a history of high blood pressure or blood clots.
How do they work?
In both cases they thicken the mucus at the entrance to the womb – so that sperm can’t enter – while also changing the lining of the womb, preventing any fertilised egg from implanting in it. The Combined Pill also prevents ovulation, whereas the Mini Pill doesn’t.
How do they affect periods?
The Combined Pill tends to make periods more regular, lighter and less painful. It can also help with PMS – not that any female has PMS, do they?!? It can also improve acne and is often prescribed for this reason alone. Sometimes there can be spotting between periods.
The Mini Pill can also prevent a regular period or make it much lighter. Again it can help with PMS.
What about side effects?
For both Pills side effects tend to appear in the first few months of taking them and can lead to different formulations being tried to find one that suits the person concerned.
For the Combined Pill these include headaches, nausea, breast tenderness and mood changes. There can also be a risk of increased blood pressure in the longer term.
The Mini Pill is associated with spotty skin, breast tenderness, weight increase and headaches.
Sadly, the Pill has also been linked to many other health issues including:
Low sex drive, vaginal dryness and painful sex.
Ulcerative Colitis and Crohn’s Disease, with these artificial hormones affecting the gut’s internal “flora and fauna.”
Increased likelihood of Candida.
Reduced absorption of Vitamins B1, B2, B5, B9, B12, C and E as well as Copper, Magnesium, Selenium and Zinc.
Reduced bone density.
Imbalance of the hormonal system generally, particularly of the Thyroid, which can last for decades.
Problems in conceiving children later on.
Ironically they can also make PMS worse, rather than better, as well as leading to weight gain and fluid retention.
Breast and Cervical Cancers.
What about alternatives?
There are lots of other options, starting with the “keep yourself to yourself” solution, often suggested by our mothers (!). More seriously though these include:
Natural planning methods, such as testing the basal body temperature, cervical mucus and the calendar / rhythm methods. These can be very effective, with estimates varying between 75% and 99%.
Barrier methods such as the condom or cervical cap / diaphragm. These have the added advantage of protecting against sexually transmitted diseases. Spermicides are often used alongside as well.
Intra uterine devices, ie, the coil whether copper or including hormones.
Other hormonal methods including the contraceptive implant or injection.
The contraceptive sponge.
Vasectomy or sterilisation.
Fertility – and whether to have children – is a private and personal matter. There’s no doubt that the Pill has given women previously undreamed of freedom but it has come at a price. At the very least sufficient information must be given of all the options available, as well as their pros and cons, to allow an informed decision to be made. And, with increasing numbers of women finding it difficult to have children at a later date, how they affect long term fertility.
As always, the choice is yours.
Tagged as: Health, Lifestyle
Share this post: