The seasons of mists and mellow fruitfulness...

Posted on 7th October 2020 at 07:33
It’s amazing how the seasons suddenly seem to turn and this year is no exception. We may only be at the beginning of October, but it feels as though Autumn is well upon us, due in large part to the recent storms and torrential rainfall.
Despite the signs of the winter to come, there are still lots of local goodies to enjoy at this time of year. While the blackberries may now be over, rosehips and sloes are coming into their own, with good crops of both to be found in the hedges if you’re quick. For a reminder about their many uses, as well as the joys of foraging, click here.
However, it’s some other fruits which are at their best at this time of year that we’d like to talk about this week. They’re the ones found in just about every fruit bowl, all year round, which is probably why we take them so much for granted. But, as with any fruit in season and freshly picked, there’s nothing to beat them. 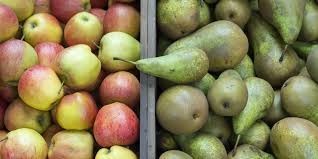