Why do we sneeze?

Posted on 25th April 2018 at 07:30
It’s been a while since one of those – not as easy to answer as you’d think – questions (!), which the younger members of the family love to ask us. And, with this time of year also marking the start of the Hayfever season, it seemed like the perfect time to write about it.
So what are we talking about this week? Sneezing. Or, if you’d like to get technical, sternutation which comes from the Latin word “sternuo” meaning to “sneeze, splutter or crackle.”
While the sound may be the same, different nationalities have very different ways of describing a sneeze. In the UK and America it’s “achoo”; in France it’s “atchoum”; “Hakashun” in Japan and “Ha-ching” in the Philippines. 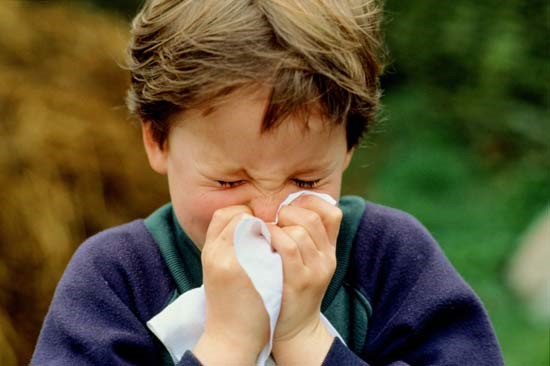 It’s also one of those topics which seems to have more than its fair share of old wives tales but, before we get too side tracked, let’s start with the obvious question.
Why do we sneeze?
The simple answer is that sneezing helps clear irritants trapped in the mucous membranes lining the Nose and Mouth. These include dust, pollen and dander from animal fur; as well as viruses and bacteria. This is why sneezing is most commonly associated with Coughs, Colds and Flu as well as allergies of all sorts, particularly, Hayfever.
Every time we breathe in, air passes through the Nose and Mouth on its way down to the Lungs. As it does so, the mucous membranes lining them warms and moistens the air, as well as trapping any particles contained within it. This prevents them from passing down into the Lungs and causing damage to the tiny air sacs, known as Alveoli, where oxygen passes into the blood.
As irritants start to build up, nerve endings in the Nose send messages to the Brain to close the Eyes, Mouth and Throat. The chest muscles then suddenly tighten, forcibly expelling air from the Lungs and forcing it upwards. This pressure forces the air, along with saliva and mucus containing the trapped irritants, out of the Nose and Mouth.
Researchers have recently likened sneezing to rebooting a computer. By clearing the Nose of irritants, it allows it to be “reset” and the internal environment brought back to normal.
Is it normal to sneeze more than once?
Yes. This occurs if the first sneeze didn’t clear all the irritants, hence further sneezes being needed to finish the job. Sometimes two or three sneezes will be enough, sometimes several bouts of sneezing are required.
And, here’s your first bizarre fact. The record for the longest bouts of sneezing is held by Donna Griffiths from Worcestershire. According to the Guinness Book of World Records, she started sneezing on 13 January 1981 and didn't stop until 16 September 1983, 977 days later.
How far can a sneeze travel?
Research in America, using a slow motion camera, showed the droplets from a sneeze travelling up to 8 metres. And, here’s a bizarre fact guaranteed to make you squirm, the droplets stayed suspended in the air for up to 10 minutes.
It’s little wonder that the old saying of “Coughs and Sneezes spread diseases” has stood the test of time. And also why we say “bless you” when someone sneezes. However, there’s another little known reason for this. It comes from the ancient belief that sneezing allowed the soul to escape from the body and blessing the person stopped this from happening.
Can we control a sneeze?
Yes and no. Sneezing is a semi autonomous reflex. This means that, while we can’t consciously make ourselves sneeze, we do have some control over it once we feel the sensation that it’s coming. It gives just enough time to transform a loud sneeze into a quieter or more restrained one. Favourite ways of doing this include taking a deep breath in, rubbing your Nose or closing your Mouth tightly and bringing the upper Lip up beneath your Nose.
And now for some of those promised old wives tales:
You close your Eyes when you sneeze to stop them popping out.
Thankfully, this is completely untrue! It’s simply part of the reflex action of sneezing. It’s been suggested that this may also help prevent any irritants expelled from the Nose and Mouth going into the Eyes. Alternatively, that the muscles around the Eyes are controlled by the same set of nerves which control sneezing and so are also triggered during the sneezing reflex.
Your Heart stops when you sneeze.
Again, this isn’t the case. Phew! However, it can cause the Heart to slow by a very tiny amount, due to a deeper – and involuntary – breath in being taken immediately before a sneeze. Most people don’t notice this tiny difference in their heart beat and so are completely unaware of it.
You can’t sneeze while you’re asleep.
True! This is due to many reflex responses being reduced during sleep, particularly during REM sleep when we’re dreaming, to stop us hurting ourselves. At the same time, the mucous membranes in the Nose swell when we lay down for any length of time, so stopping the nerves from being stimulated and so a sneeze occurring.
Sunlight can make you sneeze.
Strangely, this is true for some people, although Scientists have no idea why it happens! The best explanation they have come up with is that it’s simply a case of mixed messages; as the bright light not only causes the pupils to contract, but also triggers a sneezing reflex.
Trying to stifle a sneeze is dangerous.
For most people this isn’t the case. However, in very rare cases, sneezing can lead to ruptured blood vessels in the eyes.
And, finally, here’s a slightly strange piece of advice we came across recently about sneezing. If you don’t have a hankie to sneeze into, don’t sneeze into your hands unless you can immediately go and wash them. Instead, sneeze into the crook of your elbow, as you’re not then likely to pass them on by touch as you can with your hands.
While we’re on the subject of sneezing, let’s finish with a couple of reminders about old posts on Hayfever and Allergies more generally.
From May 2016: Hayfever, how to avoid another miserable summer.
And back even further still to March 2015: How do I know if I’m allergic to something?
As always, the choice is yours.
Tagged as: Health, Lifestyle
Share this post: