Winter the season of warming spices

Posted on 13th December 2017 at 07:30
With the nights drawing in – and temperatures dropping – it’s not surprising that our thoughts at this time of year turn to warming and comforting treats. Spices have long been treasured for their ability to pep up our staple fare not to mention their preserving and medicinal qualities.
Many of the winter treats we still enjoy today – fruit cakes, Christmas puddings, mince pies and mulled wine – date back to medieval times, when spices were a luxury. A long anticipated treat.
These days with travel having become so much easier – and the world much smaller – spices have become an integral part of our everyday lives. However, they offer much more than simply being an ingredient of our favourite Indian or Chinese foods. They also have an important medicinal aspect which has long been recognised by many traditional forms of medicine, including Ayurvedic and Traditional Chinese Medicine.
There are so many different spices we could talk about today but let’s focus on two which have been the subject of much research. And, in the process, confirmed their traditional uses (!). Tumeric and cayenne pepper.
Tumeric is a member of the ginger family, with the rhizome – or root – being used to provide the spice we’re so familiar with. It’s been used in India for thousands of years and gives curry its distinctive yellow colour as well as a warm bitter taste.
The main active ingredient in turmeric is curcumin which is only present in relatively small quantities, about 3% by weight. Added to this it’s poorly absorbed from the gut into the bloodstream, meaning that large amounts of tumeric would have to be eaten to obtain any positive effects. Interestingly, the rate of absorption can be improved by taking black pepper (bioperine) alongside and many turmeric supplements now include it for this reason. However, even taking this into account, the simplest way of taking turmeric is as a concentrated extract. 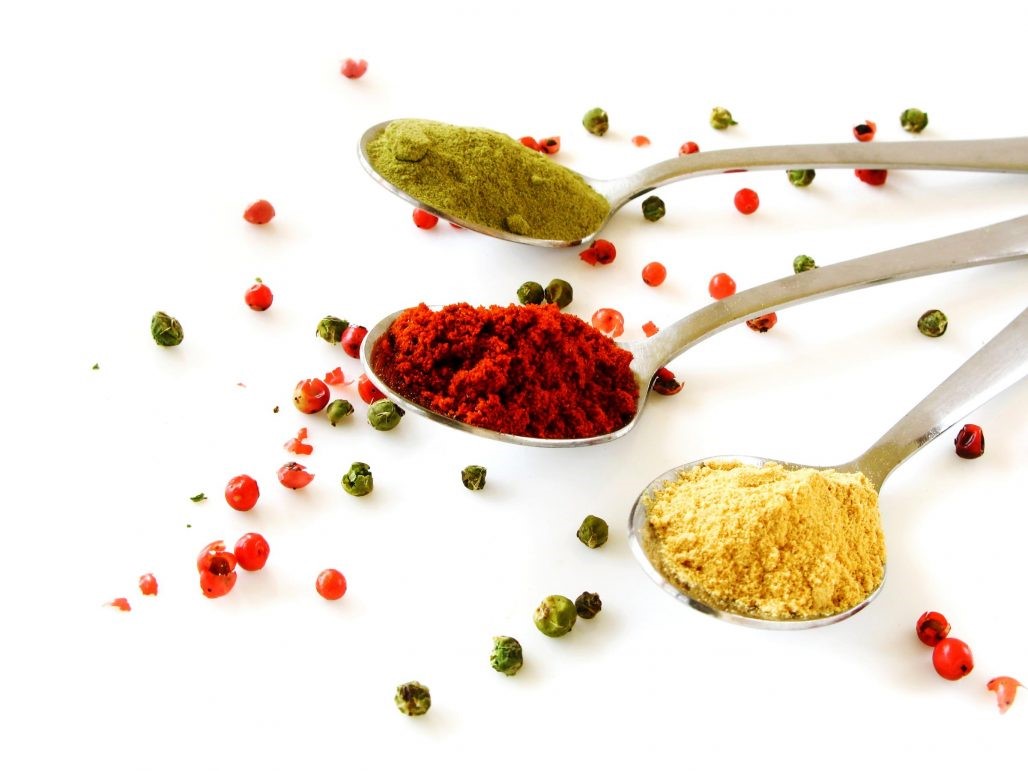 Curcumin contains a huge range of vitamins and minerals. These include Vitamins C and B6, calcium, phosphorus, zinc, potassium and manganese; as well as various phytonutrients. It’s a powerful antioxidant, thanks to the high levels of Vitamin C and is also anti inflammatory. With these two key attributes it’s not surprising that curcumin has been found to be useful for many chronic and degenerative conditions including Arthritis, Heart Disease, Alzheimers and Depression.
More generally, it’s been found to support the immune system, digestion and liver function. It helps reduce gas and bloating, detoxing – and so congestion – as well as skin conditions such as Eczema, Psoriasis and Acne.
Many people have come across curcumin in weight loss supplements, where it helps to boost the metabolic rate, so increasing the rate weight is lost – and kept off. It also plays a part in lipid – fat – metabolism and can also help lower cholesterol.
Finally, recent research has focussed on its ability to inhibit the growth of cancer cells particularly those in the breast, colon, prostate and lung.
Cayenne Pepper – better known as the chilli pepper – is a member of the pepper family which, in turn, is part of the deadly nightshade family and so is closely related to the potato, tomato and aubergine. It comes from South America and has been used for thousands of years to add heat to food as well as for its medicinal properties.
The main active ingredient in cayenne pepper is capsaicin, with the amount present varying between different members of this family. The popularity of chillies has led to the development of the scoville scale which measures the amount of capsaicin present and has resulted in great competition between growers to produce the hottest pepper each year. To give an idea of how hot they really are, here are the so called “scoville units” for a selection of peppers:
Bell peppers, nil, so contain no capsaicin.
Cayenne pepper, 30,000 to 50,000 units.
Scotch bonnets, 200,000 to 350,000 units.
Caroline Reaper, 1.6M + and has held the Guinness Book of Records since 2013 although it may now be replaced by “Pepper X” (!).
Anyway before we digress too far, like curcumin, capsaicin contains a huge range of vitamins and minerals. These include Vitamins A, B, C, E and K as well as manganese, magnesium, iron and potassium.
High levels of Vitamins C and E make it a powerful antioxidant and immune system support.
Capsaicin is particularly well known for helping support the heart and blood circulation; due to it being a good source of Vitamin K and potassium, as well as a stimulant. The many conditions it’s been traditionally used for include palpitations, irregular heartbeat, congestive heart failure, cholesterol and as a blood pressure normaliser – whether high or low.
It’s also well known as an effective anti inflammatory and painkiller for many conditions. These include Migraines, Arthritis, Fibromyalgia, lower back pain and nerve pain, such as that from Shingles. Not surprisingly, it also acts as a decongestant, helping to clear mucus and catarrh.
Capsaicin helps to stimulate digestion and improve the absorption of nutrients from food. Interestingly, it’s also been found to reduce the amount of insulin needed to remove sugars from the blood stream after a meal and so helps reduce the risk of Type 2 Diabetes.
Like curcumin, capsaicin has also been found to aid weight loss. However, this is due to it producing heat as it’s broken down which, in turn, helps speed weigh loss. It has also been found to help slow – and destroy – cancer cells, particularly those in the prostate. Having said this, a little caution is needed. Excessive amounts of cayenne pepper can cause stomach problems due to the heat produced as it’s digested. This can destroy the so called “good bacteria” found in the stomach, as well as reducing the secretion of mucus which protects its lining. So, while it can be safely eaten in normal amounts as a spice, it should only be taken in larger amounts as a supplement otherwise digestive problems may occur.
A story which perfectly illustrates how you can have too much of a good thing comes courtesy of one of our family members, who shall remain nameless (!). Having done some of his own research about lowering blood pressure, he read that cayenne pepper could be taken each morning in water. He quite happily took the recommended naturopathic dose – one level teaspoon in a little warm water each morning – for a few days and then decided to order supplies in bulk to take on holiday. Unfortunately, he didn’t realise he’d ordered a super strength product. Not surprisingly, the difference became obvious as soon as he tried to swallow it, but things only got worse later on in the day… His comment was that it was like a DIY Dyno rod – and we’ll leave the rest to your imagination!
As a sequel to this story his friend also decided to take cayenne pepper – and belonging to the “more is better” school – increased the amount to one tablespoon each morning with similar results…
You have been warned.
As always, the choice is yours.
Tagged as: Diet, Health, Lifestyle
Share this post: