Do you actually notice what's going on around you?

Posted on 9th March 2016 at 07:45
We love people watching – doesn’t everyone (!) – and never cease to be amazed at how much we can learn about a person before even speaking to them. Their posture, facial expression, clothes they wear, way they move. Oh and David can spot a dodgy hip, back, neck or knee at 50 paces (!).
We all do it subconsciously but, sadly, this usually takes the form of a knee jerk judgement. “I don’t like the look of him / her.” “How can they wear those clothes / go out looking like that.”
The sad thing is that once the call has been made, any chance of observing that person from a neutral place instantly evaporates. Getting to know what they’re really like. Of enjoying life’s rich tapestry.
Instead we automatically focus on anything that confirms our initial judgement and ignore everything else. And so a valuable opportunity is lost. 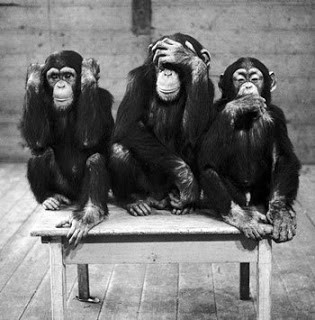 We’re so wrapped up in our own little worlds that we rarely take a moment to consciously notice the world around us and people in it.
And the same thing happens when we talk to people. That little voice in our head makes an instant judgement – often accompanied by a real time commentary – on what they’re saying.
That’s if we’re listening to them at all. More often than not it’s more like watching the television with the sound turned off. We can see their lips moving but not hear what they’re saying.
When they eventually draw breath, we dive straight in with what we want to say. Whether it’s related to what they were talking about or not.
And so a rather vicious circle goes on. Lots of noise, very little in the way of actual communication.
You can see this going on around you every day but, if you want a simple example, just watch politicians in action.
Take the typical interview, where the politician never seems to answer the question, but keeps repeating the point(s) they want to make.
Or so called “debates”, where all the participants keep repeating the party line or seek to score “points” off each other.
A deafening noise, no actual communication or progress.
So here’s a radical idea.
Instead of being swamped by your own particular dramas and life, why not just “button your lip” and observe what’s actually going on around you. Every little detail.
Listen to what the other person is actually saying. Watch their body language.
Ignore the commentary running in your head. Resist the urge to jump straight in when the noise stops.
We guarantee you’ll learn lots about the person concerned in the process – and the world around you. Not to mention yourself.
Time will seem to slow down and you’ll feel much calmer and more connected.
And even better the other person will appreciate your undivided attention which, after all, is the most valuable gift you could ever give them.
Go on try it, we dare you!
As always, the choice is yours.
Tagged as: Lifestyle, Mindset, New perspectives
Share this post: