Posted on 1st March 2017 at 07:30
Have you noticed how creative people can be with their excuses, not to mention their little white lies?
And how early this skill starts to be developed, as anyone spending time with children are all too familiar with. “The dog ate my homework.” “My Mum forgot to pack my lunch / sports kit / fill in the blank.”
Not forgetting that old, catch all standby. “I don’t know what happened; it wasn’t anything to do with me (and can’t you see my halo shining brightly, as in our picture below?!?).”
Not surprisingly, by the time adulthood is reached, many people have reached world class status; with a wide range of excuses ready for every eventuality. Little wonder we recently heard it suggested that this skill should really be recognised as an olympic sport (!). 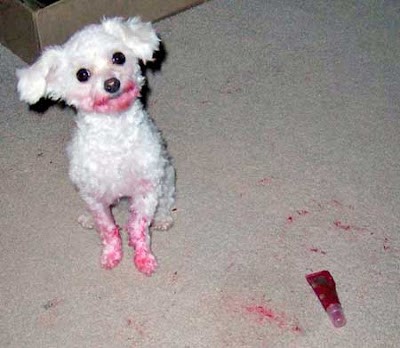 “I don’t know what happened Mum, I was only tidying up”
Anyway, before we digress much further, you may be wondering why on earth we’re focussing on this topic this week. Isn’t this blog meant to be about health related issues, not the vagaries of modern life?
Well, “yes”, that’s true. However what we’d like to do this week is to look behind the excuse, to the reason why the person feels they have to make one in the first place. Wouldn’t it be easier to say that they have – or haven’t – done something? End of conversation.
Again, the answer would be “yes.” So why don’t they do this? The most obvious reason is that it’s to avoid confrontation or, even worse, having to explain exactly why they didn’t do something.
Which brings us neatly on to the most common reason for making an excuse. Quite simply, it’s not a priority. Something that’s important to them. It may be for you, but not for them.
Doing homework is a classic example of this. Parents and teachers may see the importance and benefit of doing it, but it’s not even on the radar for many children who have a different set of priorities. Playing with friends, watching TV, pitting their wits against the latest computer game, etc, etc, etc.
While we may smile at the excuses children make, adults do exactly the same. We all have our own set of priorities; things that are important to us.
While we may know in theory (!) what we should – or shouldn’t – do, it doesn’t mean that we do it. And when we do – or don’t – it’s amazing the excuses we can come up with to justify this decision; rather than being more truthful with ourselves and saying that it simply isn’t a priority for us at the moment.
And as a quick aside, “should” is always a good indicator that you want to do something else. “Yes, I know that I should – or shouldn’t – do that (but I don’t want to do it or do something else instead).”
So why is this? Quite simply, it all boils down to taking responsibility for our lives and how we live them. The things we do or don’t do. Whether we make a conscious decision about them or not.
Let’s take an example we come across all too often. That’s our old favourite of drinking more water. Whether you want to rely on good old fashioned commonsense, or the health advice given out in the media, making sure you drink plenty of water each day is a cornerstone of good health. Even better, it’s not difficult or expensive to do.
Yet the range of excuses we’ve heard over the years for not making this simple change is staggering. The most common ones. “I’ve been too busy.” “I forgot to take a bottle of water with me.” Or, our personal favourite, “I’m allergic to water.” (And, if you stop to think about it, that statement doesn’t make any sense at all.)
However there’s another common reason for making an excuse. Lack of confidence. What you’re really saying to yourself is “I don’t feel confident to do – or attempt to do – this; so it’s easier to make an excuse instead.” And that’s a real shame, as it’s a very cunning piece of self sabotage which prevents you from doing anything different or new. So you end up stuck, doing the same thing over and over again with the same results.
If you stop to think about it for a moment, every single thing we do in our lives was new or different at some stage. When we did it for the first time. Whether it was taking our first step, learning to tie our shoelaces or using a computer. The only difference is that this time we’re making a conscious – deliberate – decision to do it; rather than relying on – unconscious – instincts or a parent telling us that we had to do it.
While it may fly in the face of popular opinion, nothing is automatically difficult to do. However, every time you tell yourself that it is, you’re making things much harder for yourself. As Henry Ford so eloquently put it:
“Whether you think you can, or you think you can’t, you’re right.”
Added to this, if you’re someone who thinks they should get it first right time, then you’re putting yourself under huge additional pressure.
The only way we learn new skills is by trial and error. Doing it, learning by our mistakes and gradually honing our skills until it becomes easy and automatic. This is how confidence is built. Slowly over time.
And this is the reason we always recommend making small changes, one at a time, gradually building on them to get the end result you desire. In the process not only do your skills increase but your confidence does too.
So, next time you find yourself making an excuse – or using the “should” word – why not stop and ask yourself what’s really going on?
If it’s not a priority for you at the moment, why not simply say so and take the pressure off all concerned? And don’t forget that you don’t have to explain your reasons why. That’s your business and no one else’s, unless you choose to involve them.
Or, if it’s more a confidence issue, why not switch your focus to the all reasons you can do it rather than all the reasons you can’t? Then take a very deep breath and just do it. If the worst happens and it doesn’t go to plan, you’ll have gained some valuable experience, not to mention some great stories to tell everyone else! And, next time, it’ll be much easier, we promise.
As always, the choice is yours.
Tagged as: Lifestyle, Mindset, New perspectives
Share this post: