The wonders of Bicarb of Soda

Posted on 19th May 2021 at 07:31
We have a standing joke in our family that everything is multi functional. And if you know anyone who uses a walking stick, you’ll know exactly what we mean! Not only is the stick used for its intended purpose, but many others too, with an incredible amount of ingenuity thrown in for good measure…
However, this adage applies equally to all those “treasures” found at the back of our kitchen cupboards and it’s one of these we’d like to talk about today. We can virtually guarantee it’s in most homes, even if it hasn’t seen the light of day for a while…
What are we talking about?
Bicarb of Soda or, if you’d prefer its full name, Sodium Bicarbonate. You may also know it as Baking Soda or Baking Powder. Although we should say that, strictly, these are a little different to Bicarb of Soda, with additional substances being added to them to make them more stable; so giving more consistent results as well as a longer shelf life. 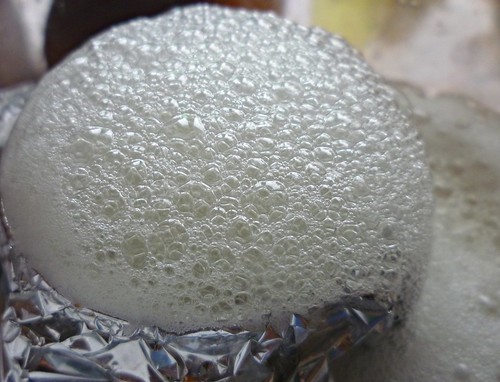 While we tend to think of Bicarb of Soda in connection with baking as a raising agent – added to plain flour before self raising flour became available or isn’t to hand – it can be used so many different ways.
And, as an aside, do you know how it does this? Quite simply it’s due to a series of chemical reactions triggered by moisture – usually water or milk – leading to the release of carbon dioxide in bubbles; effectively aerating whatever it’s mixed with, giving it the fluffy light texture we know so well.
The most basic of these is as a household cleaner with natural antibacterial properties. It can be added to hot water and used for general cleaning and washing clothes. Or, for deeper cleaning and more stubborn stains, mixed with a small amount of water to make a paste, which can be used as a semi abrasive natural cleaner. As this produces a bit of fizz – due to an interaction with the water – this gives some added “oomph” to its cleaning capacities. Alternatively, you can add a little Cider Vinegar to the water, for a similar effect.
Talking of making it up into paste, it can also be used as an anti itch remedy on bites, stings and even Chicken Pox. Simply apply the paste sparingly to the affected area and let it dry. It will then crumble away, with the residue being washed away and can be reapplied several times a day.
The paste can also be used to help draw out toxins from painful spots or Acne. Its antibacterial qualities mean that it also helps kill the bacteria causing Acne, as well as helping draw out excess oil / sebum, drying it out to help faster healing. More generally, it can be used as a gentle exfoliator – with the emphasis on gentle, don’t rub it in too hard – to help remove dry or dead Skin, so smoothing the skin. Finally, it can be used to help soothe – and ease the removal of – a splinter or thorn.
And here’s one more use for the paste. As a natural toothpaste and gentle tooth whitener – you’ll find several natural toothpastes on the shelf with this formulation. Similarly, many natural deodorants contain Bicarb of Soda to help neutralise the bacteria naturally found in the armpits which cause body odour.
A handful of Bicarb of Soda can be added to a warm bath to help soothe tired muscles or sunburnt skin. Or how about as a relaxing foot soak for tired feet?
Now on to another traditional use of Bicarb of Soda, thanks to its alkaline nature. One to two teaspoons can be taken in a glass of lukewarm water for Indigestion, Stomach Ulcers and hangovers (!). It can also be used to alkalinise the body generally, making it useful for Urinary Infections – just think of the burning sensation accompanying them. Added to this, many health problems start when the body’s PH balance – its acid / alkaline balance – is disrupted, so this can also be used as a general preventative measure.
And, finally, one other traditional use which you may not have thought of. Gout.
Gout is caused by an over production – and then build up – of Uric Acid, which is deposited in the joints, causing inflammation and pain. By combining the properties of Bicarb and lemon juice, relief can quickly be felt. Bicarb helps to alkalinise the body generally – particularly the Urine – while the lemon juice helps release Uric Acid from the joints, so reducing swelling and pain.
As before, simply add one to two teaspoons of Bicarb of Soda and the same of fresh lemon juice to a glass of lukewarm water and sip. Repeat two to three times a day for as long as needed. As always, if you’re taking any medication or have any concerns, seek medical advice beforehand. This is particularly the case if you have High Blood Pressure, due to Bicarb of Soda containing sodium – salt – which can affect it.
And, before we go, a couple of things to bear in mind.
First, double check whether the Bicarb of Soda you’re thinking of using is suitable for internal purposes. If it’s available in bulk, it’s probably for external use only (!).
Second, even if it is suitable for internal purposes, many products include aluminium to help extend its shelf life. For many different reasons, Aluminium is best avoided, so choose one that doesn’t contain it.
Last, Bicarb of Soda can be very drying to the Skin, so don’t overdo it. Use sparingly, gently and not too often.
As always, the choice is yours.
Photograph by unknown author
Tagged as: Diet, Health, New perspectives
Share this post: