Why it's important to connect to the natural world

Posted on 21st November 2018 at 07:30
We often talk about the importance of spending time outside every day. Not only does it feel good to have a break away from the hurly burly of modern life, but natural daylight plays an important part in helping set our natural body rhythms. Often referred to as the circadian rhythms, they control many different body functions including the sleep – wake cycle, release of hormones, body temperature, eating habits and digestion.
Before we go any further, let’s quickly dispel one very common misconception. So far as your body’s concerned, it doesn’t matter whether it’s a beautiful sunny day or a wet overcast one. It’s being outside in natural wavelength light that’s the important thing. You’ll still reap the benefits regardless of what the weather’s doing. 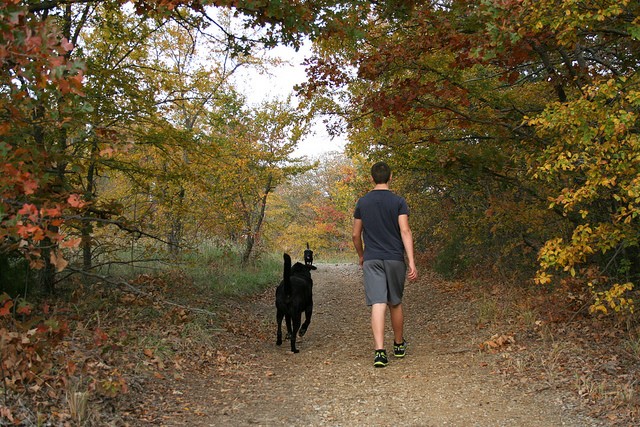 If you need a little encouragement to adopt this approach to the weather, here’s a quick observation from one of our farming clients. As a young child he was told by his grandfather that there was no such thing as bad weather. It was always a case of the wrong clothing. How’s that for a different take on the weather?!?
And, as any dog owner will tell you, however bad the weather is – and however much you really don’t want to go out for a walk – you always feel better for it when you get home… Even if it involves peeling off multiple layers of clothing, wet coats, muddy boots and having to wash your four footed friend in the sink when you get in!
However, it’s not just the natural light that’s important. Being outside allows us to connect to the Earth’s natural energy. And if this sounds far too new agey and hippy’ish, bear with us, it’ll all make sense in a minute.
For some reason, here in the west, we tend to think of the Earth as an inanimate ball of rock. While we can accept that a myriad of different forms of life live on the Earth – plants, animals, micro organisms and more – we never seem to consider that the Earth may also be a living organism. Albeit living in a different way to those on – or just under – the surface.
This is in complete contrast to those closely connected to the natural world and native peoples, who refer to the Earth as “Mother Earth”, a living being. While it’s easy to dismiss this viewpoint, the discovery of an electrical “pulse” within and around the Earth – known as the Schumann Resonance – has given some objective proof of this viewpoint. Vibrating at around 7.83hz, it’s often referred to as the heartbeat of the Earth.
What’s particularly fascinating is that our brainwaves have been found to resonate with this particular frequency. It’s the one we experience in deep sleep – as well as in meditation – and is associated with healing and regeneration. Put another way, it’s our default setting for optimal health and wellbeing.
Being such a subtle electrical charge, it’s easily disrupted by the electromagnetic radiation of our modern world. Computers, mobile phones, power lines, wifi, TV and phone masts. The list goes on and on. Little wonder that many people talk about us living in an “electrical soup.”
The good news is that by grounding ourselves to the Earth, we greatly reduce the effect of this “soup” and also improve our health. So how do we do that?
Well, it’s incredibly simple. By walking barefoot on the Earth or swimming in the sea or fresh water lakes. And if you stop to think it, this makes complete sense. After all, that’s what our ancestors did, as do children, given half a chance. Who wants to wear shoes when they can walk barefoot on the grass or a lovely sandy beach? And, while it’s always better to walk barefoot outside, doing so inside also brings benefits, albeit at a reduced level.
There’s been a huge amount of research about the benefits of grounding – or earthing as it’s also called – which include:
• Reduced inflammation and chronic pain.
• Better quality sleep.
• Increased energy levels.
• Reduced stress levels and a “quieter” nervous system.
• Reduced jetlag.
• Shorter healing times and reduced incidence of injuries.
• Less susceptibility to artificial electrical fields.
Once again, the best results come from taking a few minutes each day to connect to the Earth, whatever the weather or time of year. The quickest – and easiest – way to do this is to simply go outside first thing each morning and stand barefoot on your lawn for a few minutes. It’s the reason why Tai Chi and Chi Gong are traditionally practised outside as the sun rises. And if there’s a heavy dew, even better, as with any electrical current a little water helps it flow more strongly.
As always, the choice is yours.
Tagged as: Health, Lifestyle, New perspectives
Share this post: