Posted on 25th November 2020 at 07:14
It’s often said that a little gossip helps the world go round. Whether at home, work or within the family; talking about other people seems to be one of our favourite pastimes. And it’s not just about people we know – or know of – but also those in the public eye, even though we’ve never met them and are unlikely to do so.
Regardless of who we’re talking about, there seems to be something irresistible about unearthing another person’s secrets. Even better, if we’re the first one to do so and pass them on, particularly if they’re less than positive. If not downright malicious, perhaps, driven by the green eyed monster…
Increasingly, it’s fuelled by social media which, sadly, encourages knee jerk reactions. The repeating of information without stopping for a moment to consider its accuracy, let alone the ramifications for the person concerned. Or ourselves. And aided in no small part by our old friend, peer pressure. More about this in a moment.
So, why do we gossip and can it really be a positive thing as some Psychologists suggest? 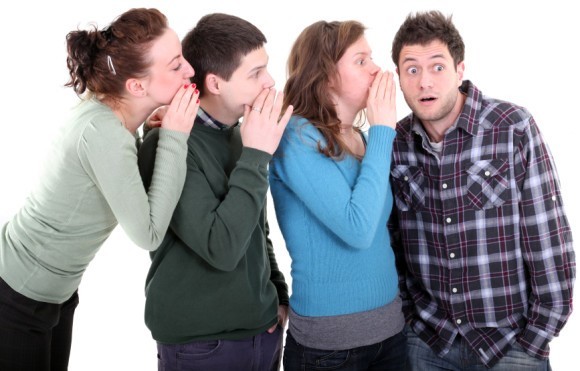 As so often is the case, let’s start with our trusty online dictionary:
“Gossip, casual or unrestrained conversation or reports about other people typically involving details that are not confirmed as being true.”
And the words to notice here are “unrestrained”, “other people” and “not confirmed as true.”
Interestingly, Psychologists use a much broader definition:
“Gossip, talking about people who aren’t present.”
Or, as one anonymous quote puts it so beautifully:
“Gossip is saying behind their back what you would not say to their face.”
Psychologists often say that gossip allows important information to be shared within a group about the behaviour of others, whether in the group or not. A way of sharing worries as well as seeking reassurance and support. It also acts as an early warning system, helping to reinforce group bonds as well as the boundaries of acceptable behaviour for the group as a whole. So, it’s easy to see how peer pressure plays a large part in this process…
Indirectly, gossip is also a way of speaking well of yourself, with its inference that, of course, you wouldn’t do whatever it is. Perish the thought (!). It’s also fun to pique the interest of others and be the centre of attention as juicy information is revealed.
While there’s no doubt that passing on information about a real and imminent danger can be a real lifesaver – in every sense of the word – the majority of “information” passed on as gossip is very wide of this mark. 2 + 2 = 5. Or, even, 10. Has more in common with the childhood game of Chinese Whispers than anything else…
If we put it in the most positive light (!), gossip is a huge distraction. Stops us from living our own lives. Even worse, it gives the Little Monster in our heads free rein to provide a continuous commentary – and judgements – based on hearsay and matters that have absolutely nothing to do with us.
So, returning to the title of this week’s post, perhaps it’s time for a simple solution to gossip. A reminder of one of the adages our Mother – or Grandmother (!) – used to say to us as children. “If you can’t say anything nice, then don’t say anything at all.”
And, if you’d prefer a more scientific approach, here’s one that’s stood the test of time. It comes from Socrates, the Ancient Greek Philosopher. When someone wanted to pass on some juicy details – gossip (!) – about another Philosopher, Diogenes, he asked whether it would pass through the Triple Filter:
The First Filter, had it been proven to be true?
The Second Filter, was it good – or nice?
Finally, the Third Filter, was it necessary or useful?
These three filters are easy to apply to ANY information which comes your way, not just that which comes into the “gossip” category. And, remember, they ALL need to be passed – or boxes ticked (!) – not just one or two of them...
So, if someone wants to tell you anything, have they made sure it’s 100% true?
Is it something good or nice about someone?
And, finally, is it necessary or useful?
Instantly, a huge number of distractions – not to mention mis information (!) – are cleared from your life, providing space for things which are truly useful to you.
Filling your mind with gossip and junk of any description is never going to help you live your life to its full. It doesn’t matter whether it’s your junk or someone else’s. Taking pleasure in someone else’s problems doesn’t help you – or them. And, if something doesn’t help anyone concerned; then there’s only one other thing it can do. Hurt everyone, yourself included. Perhaps not at this precise moment – or in a clearly linked way – but it will at some stage, trust us.
And, if you need any other incentives to think twice before joining the gossip mill, here’s another lovely gossip related proverb, this time from Spain.
“Whoever gossips to you will gossip about you.”
As always, the choice is yours.
Picture by unknown author
Tagged as: Mindset, New perspectives
Share this post: