Is vaping really the healthy alternative to smoking?

Posted on 21st February 2018 at 07:30
We’ve recently been away for a few days and were amazed to see a huge sign in a shop window. It proudly proclaimed “Smoking is dangerous. Vaping is the healthy and safe alternative.” We should quickly add that this wasn’t in the UK but, even so, we were still surprised to see vaping being marketed in such a blatant way.
Interestingly, conversations with smokers have confirmed that this is their understanding of vaping and explains why so many are now making the switch. The question is whether it’s true? 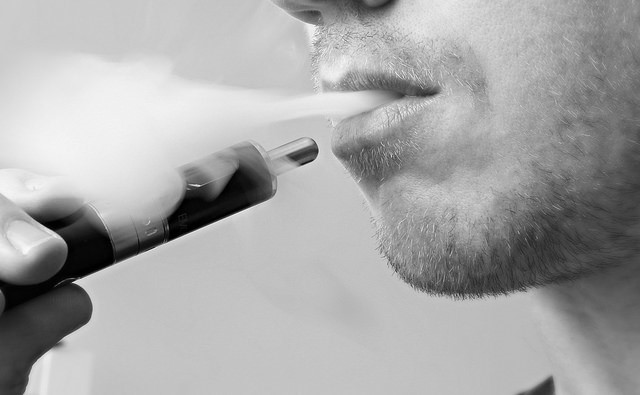 There can be little doubt, even by the most hardened of smokers, that smoking is associated with a myriad of serious health concerns. Short term and long term. For the smoker and those around them.
Cigarette smoke contains a huge number of chemicals, with many being toxic and over 40 considered carcinogenic. These include nicotine, tar, carbon monoxide, formaldehyde, ammonia, hydrogen cyanide, arsenic and DDT. Some of these come from the tobacco itself, while others come from the way it’s grown and processed.
Nicotine is highly addictive and the reason why people smoke. It’s easily absorbed from the lungs and travels round the body incredibly quickly, reaching the brain about 6 seconds after being inhaled. In small doses it’s a stimulant; in larger doses a depressant. In even larger doses it becomes a lethal poison and has even been used as an insecticide for this reason.
However, it’s not only nicotine that causes health problems. Cigarette smoke also contains carbon monoxide, which easily passes from the lungs into the blood. Here it reduces the amount of oxygen carried by red blood cells to the rest of the body. In other words, it literally starves the body of oxygen.
Added to this, most of the other chemicals contained in cigarettes remain in the lungs, binding together with tar to form a sticky mass. This clogs up the lungs and makes it more difficult for oxygen to pass from the lungs into the blood AND for carbon dioxide to move the other way, to be released from the lungs as we breathe out. In the process it also damages the mucous membranes and cells lining the lungs.
By contrast e cigarettes consist of a cartridge of liquid, battery and LED light. When turned on, the liquid in the cartridge is heated up, producing an aerosol mist or vapour which is then inhaled. Hence it being called vaping, as there’s no smoke or combustion.
The ingredients in the cartridge vary, but usually include nicotine – unless it’s nicotine free (!) – plus chemicals to vaporise it, as well as additives and flavourings. These include vegetable glycerine, propylene glycol, formaldehyde, nitrosamines and lead. Silicate particles, a known cause of lung disease, are found in both conventional and e cigarettes.
As with conventional smoking, there are still the problems associated with nicotine. In addition, there’s also concern about the unknown – and longer term – effects of inhaling a cocktail of chemicals which then enter the blood stream. And, as with conventional cigarettes, those around the vaper are affected too.
Problems have already been found with one – now banned – flavouring, diacetyl, which had been linked to lung damage in those working in microwave popcorn factories. Nicknamed “Popcorn Lung” it was found to causing scarring and a significant loss of lung function longer term.
Finally, there is also a list of well known side effects from e cigarettes including a dry mouth and skin, nose bleeds, rashes, itching, puffy / dry eyes and a caffeine sensitivity.
So is this just another case of a rather selective message being given to consumers?
Sadly, yes. As we’ve already said, there can be little doubt that smoking is associated with many serious health problems. However, vaping is far from risk free. Nicotine is a powerful drug regardless of how it’s administered – smoking, vaping or patches – with a whole list of health issues. Added to this, like conventional cigarettes, e cigarettes also contain a long list of chemicals and other toxins; the long term effects of which are unknown.
Put another way, it’s a bit like saying that one inherently dangerous pastime is “safer” than another, as the potential for serious injury is different or slightly lower. They’re both risky, it’s just a question of degree. That somehow it’s "better" ie, healthier, to choose the lesser of two evils.
The bottom line is that less risky doesn’t automatically mean “safe”. Or “healthy.” And this is an idea that can be applied to many different things in life…
As always, the choice is yours.
Tagged as: Health, Lifestyle, New perspectives
Share this post: