The bitter taste of artificial sweeteners

Posted on 11th May 2022 at 07:28
As we’ve probably mentioned several times before (!) we do a lot of research. Some is very specific, usually aimed at helping a Client with a particular issue, or in response to seeing several Clients with a similar issue in a short period of time. Alongside this we subscribe to many different blogs and news channels covering a huge range of health and lifestyle issues on a daily basis, as well as following up on anything that piques our interest.
While much of this information finds its way into blog posts, some doesn’t, for the simple reason it would make a very short – or, perhaps, too specific – post. So, we just keep the links and hope to be able to use them at some time in the future… 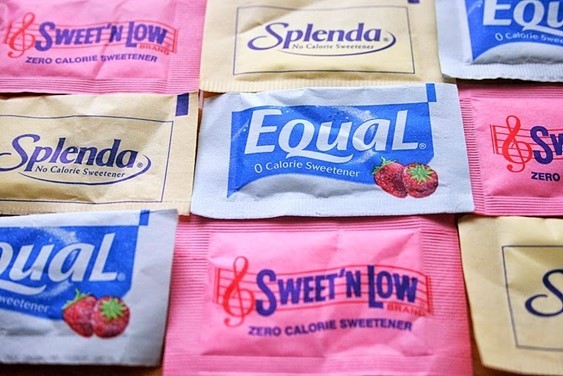 Which brings us on to what we’d like to talk about today. It’s a topic we’ve written about before, as well as having mentioned in passing on numerous occasions. Artificial Sweeteners. However, rather than looking at them generally, we’d like to pass on some interesting pieces of research we’ve come across in the last few weeks.
The first concerns Sucralose, which comes under a number of different brand names including Splenda, Splenda Zero and Zero-Cal. It found that, when heated, a number of toxic compounds were released particularly dioxins which have been linked to Cancers as well as hormonal disruption. Even worse, these were then stored in adipose tissue – fat cells – along with other toxins. And this doesn’t just mean using artificial sweeteners in cooking, but also adding them to hot drinks or foods.
If you’re wondering why artificial sweeteners are stored rather than being released from the body in the usual ways – urine or faeces – the answer is simple. The Liver finds them difficult to break down and so sends them for storage in as safe a place as possible. This usually means adipose tissue, as it’s away from major organs, so minimising the risk to the body overall.
The second also focussed on Splenda and its effects when eaten in large quantities. Again, it was linked to Cancers – and also malignant tumours – particularly of the Blood, Bone Marrow and Lymphatic System.
Next comes a series of studies looking at the effects of artificial sweeteners generally. These all linked them to an increased risk of Obesity, Type II Diabetes and Metabolic Syndrome. Ironically, the same conditions for which sweeteners are being promoted.
More specifically, artificial sweeteners have also been found to affect the balance of gut bacteria. Not only do these play an important part in the digestion of the food we eat – and the absorption of its nutrients – but also help synthesise a wide range of other substances needed by the body. Just as important, they’re part of the first line of defence for the Immune System, helping prevent any external threats from entering the body. And it doesn’t matter whether these are food related, bacteria, viruses or other foreign materials or threats.
Why artificial sweeteners effect the so called “good bacteria” more than the “bad bacteria” isn’t clear. However, the end result is that the “bad bacteria” start to dominate, leading to a greater likelihood of Candida and inflammation which, in turn, is linked to IBS and Crohn’s Disease.
Given what has already been said about artificial sweeteners not being easy to break down, it’s not surprising they’ve also been found to adversely impact the Liver, the body’s central waste disposal / storage site.
Finally, artificial sweeteners have been found to remain in the blood stream for much longer than glucose. It’s not clear how this affects blood pressure, but it has been found to damage the lining of blood vessels which, in turn, is linked to an increased risk of Heart Attacks and Strokes.
We appreciate this all sounds like very bad news. However, forewarned is forearmed; allowing you to make an informed decision on whether to use artificial sweeteners or not. More generally, it’s a timely reminder of the power of advertising and how it can be used to paint a very one sided picture of a “quick fix.”
The good news is the solution is simple. To never accept anything on face value but do a little research before making a decision of what’s best for you – and that includes us too! And, if something sounds too good to be true, then it probably is…
As always, the choice is yours.
Picture by unknown author
Tagged as: Diet, Health, Lifestyle
Share this post: